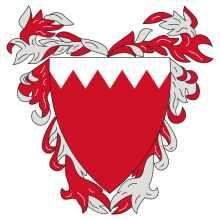 In 1783, the Sunni Al-Khalifa family took power in Bahrain. In order to secure these holdings, it entered into a series of treaties with the UK during the 19th century that made Bahrain a British protectorate. The archipelago attained its independence in 1971. A steady decline in oil production and reserves since 1970 prompted Bahrain to take steps to diversify its economy, in the process developing successful petroleum processing and refining, aluminum production, and hospitality and retail sectors, and also to become a leading regional banking center, especially with respect to Islamic finance. Bahrain's small size and central location among Gulf countries require it to play a delicate balancing act in foreign affairs among its larger neighbors.

The Sunni-led government has long struggled to manage relations with its large Shia-majority population. In early 2011, amid Arab uprisings elsewhere in the region, the Bahraini Government confronted similar pro-democracy and reform protests at home with police and military action, including deploying Gulf Cooperation Council security forces to Bahrain. Political talks throughout 2014 between the government and opposition and loyalist political groups failed to reach an agreement, prompting opposition political societies to boycott parliamentary and municipal council elections in late 2014. Ongoing dissatisfaction with the political status quo continues to factor into sporadic clashes between demonstrators and security forces.

Bahrain is a constitutional monarchy.

The purpose of this Resolution is to define the requirements and conditions for obtaining a licence for the division and partition of lands. This Resolution is composed of 2 Chapters divided into 7 articles.

This Resolution aims at soil and environment protection. This Resolution is composed of 14 articles. Article 1 defines the zones from which it may be allowed to take away or transport sand, pebbles and stones. Articles 2-8 define the requirements and conditions for taking away sand, pebbles and stones necessary for filling up and construction operations.

The aim of this Decree is to regulate the Survey and Land Registration Bureau. This Decree is composed of 3 articles.

This Resolution defines the zones and areas in which foreigners (physical persons or juridical persons) can appropriate lands in the Kingdom of Bahrain in accordance with the provisions of Legislative Decree No. 2 of 2001.

This Implementing Regulation is composed of 32 articles. Article 1 gives terms and definitions. Article 2 charges the Committee of Industrial Zones Affairs to propose and define areas and sites for the establishment of industries.

This Resolution is composed of 9 articles. Article 1 decrees the ban on the division of lands intended to the construction or reconstruction before obtaining licences from the Ministry of Housing. Article 2 specifies documents and certificates necessary for submitting applications to the department of Physical Training.

This Decree Law is composed of 8 articles. Article 1 defines requirements and conditions for the possession and acquisition of lands and buildings by physical and juristic citizens from Countries of the Gulf Cooperation Council (GCC). Article 3 deals with the transfer of the ownership of lands acquired in accordance with this Decree Law.