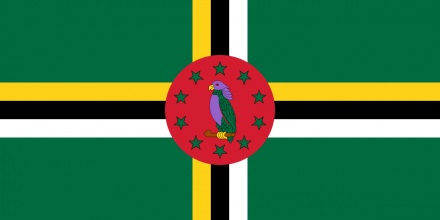 Dominica was the last of the Caribbean islands to be colonized by Europeans due chiefly to the fierce resistance of the native Caribs. France ceded possession to Great Britain in 1763, which colonized the island in 1805. In 1980, two years after independence, Dominica's fortunes improved when a corrupt and tyrannical administration was replaced by that of Mary Eugenia CHARLES, the first female prime minister in the Caribbean, who remained in office for 15 years. On 18 September 2017, Hurricane Maria passed over the island causing extensive damage to structures, roads, communications, and the power supply, and largely destroying critical agricultural areas.

The politics of Dominica takes place in a framework of a parliamentary representative democratic republic, whereby the Prime Minister of Dominica is the head of government, and of a multi-party system. Executive power is exercised by the government. Legislative power is vested in both the government and the House of Assembly. The Judiciary is independent of the executive and the legislature.

Information from the CIA Factbook and Wikipedia article Politics of Dominica

The constitution was promulgated by Queen Elizabeth II through an Order in Council at independence.

The source for this link is the Georgetown University Political Database of the Americas.