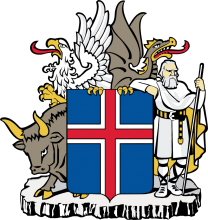 Politics of the Iceland take place in the framework of a parliamentary representative democratic republic, whereby the President is the head of state, while the Prime Minister of Iceland serves as the head of government in a multi-party system. Executive power is exercised by the government. Legislative power is vested in both the government and the parliament, the Althingi. The judiciary is independent of the executive and the legislature.

From wikipedia article Politics in Iceland

The source for this link is the government of Iceland.

The Althingi drafted and approved the constitution before it was confirmed by the President.