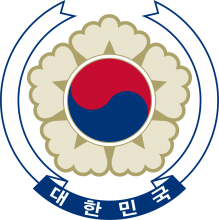 An independent kingdom for much of its long history, Korea was occupied by Japan beginning in 1905 following the Russo-Japanese War. In 1910, Tokyo formally annexed the entire Peninsula. Korea regained its independence following Japan's surrender to the US in 1945. After World War II, a democratic-based government (Republic of Korea, ROK) was set up in the southern half of the Korean Peninsula while a communist-style government was installed in the north (Democratic People's Republic of Korea, DPRK). During the Korean War (1950-53), US troops and UN forces fought alongside ROK soldiers to defend South Korea from a DPRK invasion supported by China and the Soviet Union. A 1953 armistice split the Peninsula along a demilitarized zone at about the 38th parallel. PARK Chung-hee took over leadership of the country in a 1961 coup. During his regime, from 1961 to 1979, South Korea achieved rapid economic growth, with per capita income rising to roughly 17 times the level of North Korea.

South Korea held its first free presidential election under a revised democratic constitution in 1987, with former ROK Army general ROH Tae-woo winning a close race. In 1993, KIM Young-sam (1993-98) became the first civilian president of South Korea's new democratic era. President KIM Dae-jung (1998-2003) won the Nobel Peace Prize in 2000 for his contributions to South Korean democracy and his "Sunshine" policy of engagement with North Korea. President PARK Geun-hye, daughter of former ROK President PARK Chung-hee, took office in February 2013 as South Korea's first female leader. In December 2016, the National Assembly passed an impeachment motion against President PARK over her alleged involvement in a corruption and influence-peddling scandal, immediately suspending her presidential authorities and establishing Prime Minister HWANG Kyo-ahn as Acting President. The Constitutional Court is currently adjudicating the impeachment case. South Korea will host the 2018 Winter Olympic Games. Discord with North Korea has permeated inter-Korean relations for much of the past decade, highlighted by the North's attacks on a South Korean ship and island in 2010, the exchange of artillery fire across the DMZ, and multiple nuclear and missile tests in 2016.

Korea is a presidential republic.

The Purpose of this Decree is to prescribe matters delegated by the Rearrangement of Agricultural and Fishing Villages Act and those necessary for the enforcement of such matters. Article 3 lists item subject to a resource survey to be conducted under article 3 of the aforementioned Act. Article 5 lays down provisions relating to the proposal of a rural landscape management plan.

The purpose of this Act is to prescribe matters necessary for the observation of, prevention of, provision against, and action against earthquakes, tsunami, and volcano, earthquake-proof measures, and research and technical development to reduce earthquake disasters and volcano disasters in order to protect the life and property of the people and major infrastructure from disasters due to earth

The purpose of this Decree is to provide for the matters that are delegated by the Act on the Establishment, Management of Spatial Data and those necessary for its enforcement.

The purpose of this Act is to contribute to the efficient management of national land, safe marine transportation, and the protection of ownership of citizens, by prescribing matters concerning the standards and procedures for surveying and waterway survey as well as the preparation, management of cadastral records and comprehensive real estate records.

The purpose of this Decree is to provide for matters delegated from the Landscape Act and matters necessary for the enforcement thereof.

The purpose of these Rules is to prescribe matters delegated by the Act on Acquisition of and Compensation for Land for Public Works Projects and the Enforcement Decree of the same Act, and matters necessary for the enforcement thereof.

The purpose of this Act is to prevent speculation in land and promote the effective utilization of land by restitution development gains accruing from land and duly distributing them, thereby contributing to the sound development of the national economy.