The LAND-at-scale program aims to apply gender transformative approaches to land governance in its projects. Gender was thus one of the discussion themes during the LAS exchange days in June, when project partners from across the world gathered in Utrecht, The Netherlands. Project partners from the different countries shared contexts, challenges, and tools to bring about better land rights for women (and youth) through their interventions. This blog describes the common trends and actions across the projects, and is enriched with additional insights from the LANDac Annual Conference 2022, the LANDac Summer School on Land Governance, and an earlier webinar on gender transformation.

There are important differences between public land and customary land, and between formal/legal and informal tenure systems. Customary and informal tenure systems based on common ownership and use rights in essence are gender just. However, in combination with (legal) systems that institutionalize ownership, these ownership rights tend to be accorded to men. For example, Mozambique has a progressive constitution in which  land under customary tenure is owned by the state. Under this constitution men and women have equal rights to land. In practice however, women’s rights to own land are hindered by customary practices. In Rwanda, the project partners found that only a few women recur to formal justice to remedy injustice in the traditional system. In the Somali context it is observed that there are many female-headed IDP households in the urban areas targeted by LAS, but that in the local land administration structures, there are no women. Whereas women might have certain informal land rights, ownership often remains with men.

A mapping exercise in Ghana, that was presented during the LANDac Summer School by the LAS knowledge management gender focal point, visualized how these unequal positions play out on the ground (see Figure 1). The yellow lines represent land rights by women, the red lines by men, with partial land rights on the left and exclusive rights on the right.  The picture clearly shows that women have some right to many parcels, but that for only a small number of these plots they have exclusive rights, without interference by men. This illustrates that traditional and cultural norms in practice can turn women into land users, as opposed to men who usually are the owners and decision-makers. 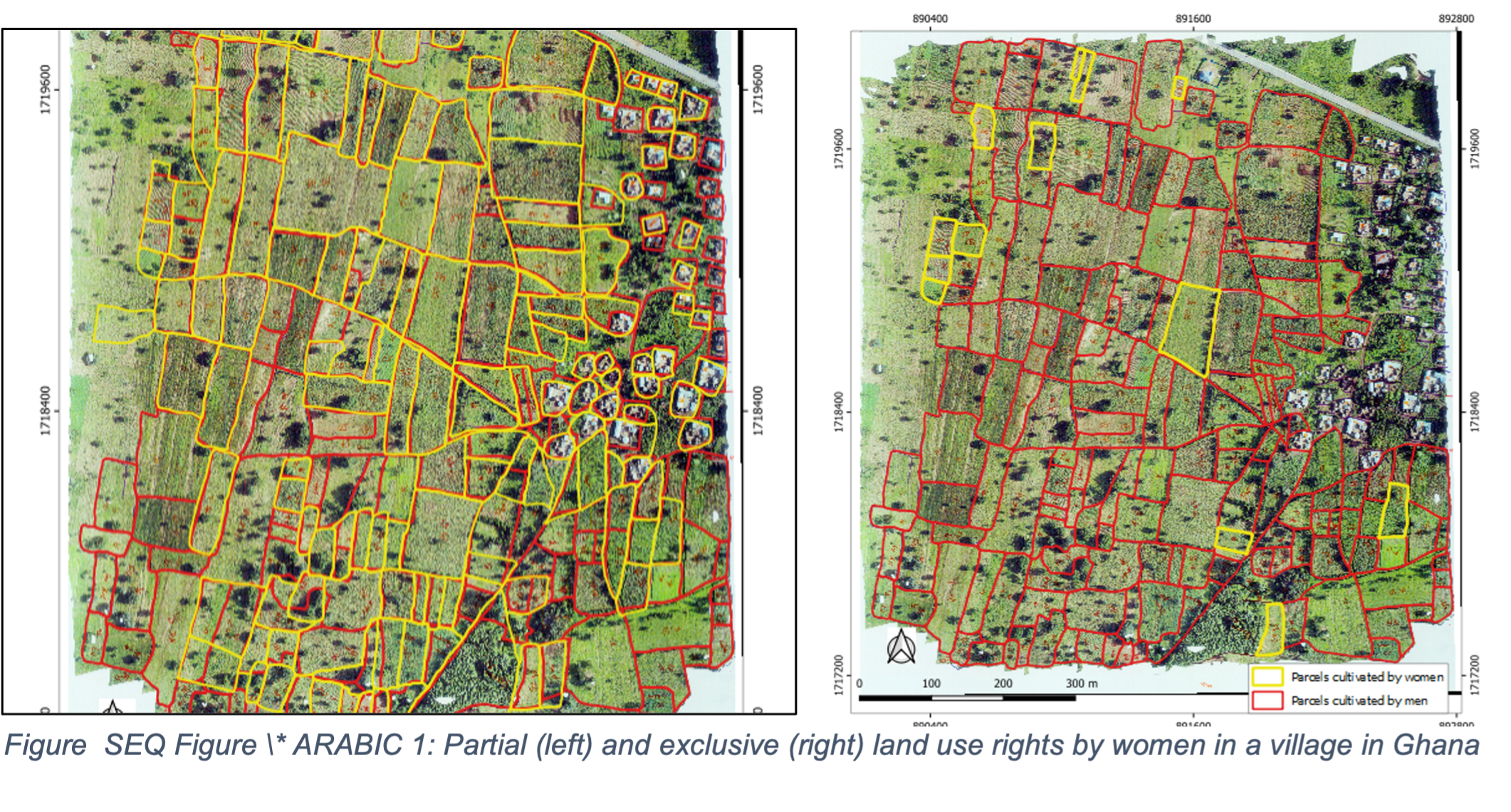 These findings are important for the LAND-at-scale program. Land delimitation and registration interventions that build on national laws provide spaces for asserting the male roles of power and authority – as heads of family – according to their customary traditions. Institutionalization, delimitation, and registration processes of land rights in contexts of plurality thus pose a potential risk to marginalize women’s rights to land.

To address gender inequalities in access to land and access to (land) justice, the LAND-at-scale project partners have designed several strategies and tools. Training is an important avenue to build capacity among women, and men, to enable meaningful participation by women towards more equal rights. In Uganda, the project partners roll out both the Gender Evaluation Criteria and Social Norms Transformation training from GLTN, whereas in Mozambique a key component of the LAS intervention is the training of female paralegals. Engagement with universities to build local knowledge on legal aspects is also implemented. The Knowledge Management team adds to insights on inclusion of women, and other vulnerable groups, in local conventions through local research in Mali.

A second approach is to actively include women in land mapping and registration activities. Joint land titles naming both husband and wife, or family land titles, are handed out to acknowledge and register the rights of women and youth. This is the case in for example Uganda and Burundi. Despite these initiatives, there are concerns over the longer-term impact of such joint registrations. Subsequent land transactions remain largely informal, potentially undermining the rights of women. The Knowledge Management team has started research into the longer-term effects of land registration on women’s land rights and tenure security.

Meaningful engagement – with women and men

Project partners across the LAND-at-scale program highlight that separate engagement with women is essential to provide these women with a safe space to voice their ideas, needs and concerns. In Burkina Faso it is observed that women will not talk if men are present, with the Burundi partners adding that there is little benefit in trying to engage with women in a public debate. These sentiments were also echoed in the Mozambique context. One of the LAS partners in Colombia experienced that in two communities it was difficult to get women to participate in project activities.

At the same time, men need to be included in sensitization efforts on the importance of improved rights for women. As decision-makers they play an important role to bring about change on the ground. This holds for traditional authorities, government agencies, judges, or informal family/village councils. But, women empowerment can be threatening for men as they stand to lose some of their power. As one of the participants from the LAS exchange remarked, the key question is how to make gender interventions attractive to men?

Overall, gender transformative approaches to land governance link into a much wider system of tradition, customs and religion. In order to achieve change, project partners indicate that there is a need for a complex cultural transformation where deeply rooted prejudices and historical practices need to be tackled, and mindsets of both men and women altered. This is a process that requires time, stretching far beyond the LAND-at-scale projects. The LAND-at-scale program strives to contribute to these deeper transformations through the interventions on the ground, and through building and sharing new insights on gender and land with stakeholders beyond the program.

About the Land-at-Scale Blog Series

LAND-at-scale is a land governance support program for developing countries funded by the Ministry of Foreign Affairs of the Netherlands and implemented by Netherlands Enterprise & Development Agency.  LAND-at-scale aims to contribute to fair and just tenure security and access to land and natural resources for all.  This blog series showcases insights from the LAND-at-scale programme and learning from the project countries.