With a large population and limited availability of land, Vietnam’s endowment of 0.3 hectare of agricultural land per person is among the lowest in the world. [1] Vietnam is historically a nation of small-scale rice farmers: the average farm size is 1,560 square meters, less than one-third that of Thailand or Cambodia. [2] Rapid economic growth in the past two decades has converted up to one million hectares of household farmland to commercial and residential use. [3] Land conversion has led to an increasing trend of land disputes [4] and is a factor contributing to widening rural-urban disparities. [5] 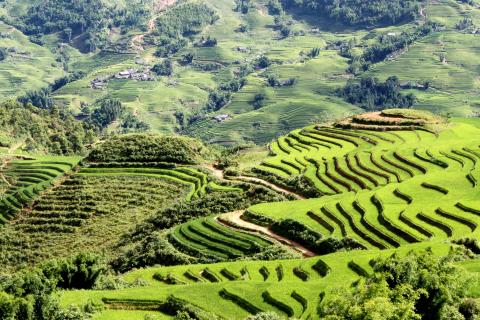 As of the end of 2013, 81% of Vietnam’s total land area of 33 million hectares was classified by the government as agricultural land, including cropland (35%), forest land (45%), and aquaculture (1%).[13] 3.8 million ha (about 35% of all cropland) is legally reserved for rice cultivation only,[14] although the area of rice land has decreased slightly since 2011.[15] The government’s priorities for land use from 2016-2020 emphasize infrastructure construction, industrialization, and urban expansion. Farmers whose land is threatened by drought, salinization, and climate change will be given permission to transfer land to other agricultural purposes.[16] Such environmental effects, which are also linked to dam construction and deforestation, are increasingly affecting coastal agricultural land, including over 970,000 ha in the Mekong Delta.[17]

Vietnam’s massive contamination by landmines and unexploded ordnance has been partially addressed through intensive efforts of the armed forces and international demining support. The central provinces around the former demilitarized zone (DMZ) and certain border areas remain the most affected.[27] Dioxin-based herbicides such as Agent Orange were sprayed over more than 2.2 million ha of land in South Vietnam during the Vietnam War, leading to health and localized environmental effects, but leaving no long-term soil contamination.[28]

The VGGT in Vietnam

"We, the agriculture ministers assembled at the GFFA 2015, advocate: […]implementing and applying the "Voluntary Guidelines on the Responsible Governance of Tenure of Land, Fisheries and Forests in the Context of National Food Security" and the "Principles for Responsible Investment in Agriculture and Food Systems" at regional, national and local level, and we support the FAO in its efforts; [...]"

In addition, Vietnam has engaged in dialogue to improve governance of tenure within the framework of the VGGT as part of the Mekong Regional Land Governance Initiative, implemented a multi-stakeholder workshop to discuss the implementation of the VGGT and used the VGGT to identify challenges and opportunities of recognizing and protecting customary tenure systems in Viet Nam.

Vietnam’s Constitution holds that land and other natural resources are “public property, owned by all the people, and represented and uniformly managed by the State”.[6] In Vietnam’s single-party political system, overall direction for land policies is set by the Communist Party’s Political Bureau (Politburo). The Ministry of Environment and Natural Resources (MONRE) is the primary government agency responsible for developing and implementing land policy. The National Assembly approves draft laws and monitors their implementation. Additional oversight roles are given to the ruling party, the Vietnam Fatherland Front,[7] and the Vietnam Union of Science and Technology Associations (VUSTA),[8] the latter a socio-professional umbrella organization that registers many Vietnamese NGOs.

Vietnam’s current Land Law was issued in 2013. [9] Following passage of the revised law, MONRE issued a series of sub-law decrees covering implementation guidance, compensation, resettlement, and land pricing. [10] Some key features of the 2013 Land Law include:

Research on transparency of land information concludes that there were many improvements in the government’s provision of information from 2010-14, but that overall transparency still falls short of legal requirements and full access to information.[11] Civil society interest in land policy issues has increased in recent years. Three land-related networks are currently active: the Land Alliance (Landa), Forest Peoples Land Rights Network (LandNet), and Forest Land Coalition (Forland).[12]

Research on transparency of land information concludes that there were many improvements in the government’s provision of information from 2010-14, but that overall transparency still falls short of legal requirements and full access to information.[11]

The following transparency-related scores are listed for Vietnam in the Land Governance Assessment Framework carried out by the World Bank in 2013.

Transparency of Land Use:

Women face disparities in access to land, particularly through patrilineal inheritance customs.[26] Up to 2012, only 36% of agricultural LURCs were held jointly or in women‘s names for the Kinh majority, and an even smaller 21% for ethnic minority women.

Legal recognition and allocation of tenure rights and duties

The State allocates or leases land to individuals and organizations through issuance of Land Use Right Certificates (LURCs).[18] LURCs may be exchanged, transferred, mortgaged, leased, and inherited. Varying rights are granted for different types of land. Residential land is allocated for indefinite terms; agricultural LURCs (“red books”) and forest land for 50-year terms.[19] Farmers cannot convert agricultural land to other uses without state permission.[20] Forest users’ rights to use allocated land are the most restricted, especially on harvesting timber.

Vietnamese law does not recognize customary forms of tenure, and communities (villages) do not have legal status to engage in land transactions. This is inconsistent with customary practices of many ethnic groups, who perceive land (especially forests) as belonging to an entire village. However, the Law on Forest Protection and Development (2004) does allow for community management of forest land.[21] As of 2015, only 2% of forest land had been allocated to communities, compared with 26% to individuals; the remainder is held either by state enterprises, management boards, or local authorities.[22]

Vietnam’s current Land Law was issued in 2013. [9] Following passage of the revised law, MONRE issued a series of sub-law decrees covering, among other issues, land pricing. [10] Some key features of the 2013 Land Law include:

Rapid economic growth in the past two decades has converted up to one million hectares of household farmland to commercial and residential use. [3] Land conversion has led to an increasing trend of land disputes [4] and is a factor contributing to widening rural-urban disparities. [5]

Vietnam has 313 economic zones used for export industrial production, including industrial parks and Special Economic Zones (SEZs).[32] There are few cases of large agricultural concessions granted to foreign investors;[33] instead, state enterprises keep a leading role in the economy and manage over 2.8 million ha of agricultural and forest land.[34]

The 2013 Constitution and Land Law permit the state to recover allocated land through a process of compulsory land acquisition. Such expropriation must be based on a national defense or security purpose or “in the national or public interest”.[29] This is narrower than pre-2013 law, which allowed land acquisition for economic development purposes.[30] An estimated 10% of the population has been affected by expropriation, but there are initial signs that the revised law has reduced the incidence of new cases.[31]

Article 61 of the 2013 Land Law 45/2013/QH13 provides a clear definition of the circumstances in which land may be recovered for national defense or security purposes. Article 62, however, contains the provision "implementation of projects which or decided by the Prime Minister, including… For more browse the qualitative dataset developed by Tagliarino (2018) to assess how national laws in Vietnam measure up against the international standard on expropriation and resettlement as established by VGGT section 16.

The State allocates or leases land to individuals and organizations through issuance of Land Use Right Certificates (LURCs).[18] Issuance of LURCs has proceeded quickly in some areas of the country, slowly in others. The initial land titling program of the government in the 1990s was one of the largest and most rapid such efforts in the world.[23] As of 2013, 38 million certificates had been issued, with at least 11 southern provinces close to full coverage and many others below 70% completion.[24] The World Bank and other international donors have supported land titling programs, the last of which ended in 2015.[25]

Following passage of the revised 2013 Land Law, MONRE issued a series of sub-law decrees covering, among other issues, decentralization of land use planning. Citizens and mass organizations are given limited monitoring roles in land use planning (Article 43), land use conversion (Article 69), and land management (Articles 198-199).

Following passage of the revised 2013 Land Law, MONRE issued a series of sub-law decrees covering, among other issues priority in land allocation for ethnic minorities (Article 133).

Resolution of disputes over tenure rights

MONRE and the National Assembly keep annual records of complaints and petitions sent by citizens. Land disputes comprise the vast majority of all complaints: 98% of those sent to MONRE in 2014.[35] Of one million complaints submitted from 2003-2012, the National Assembly reported that “only around half...were correctly, or partially correctly, handled”, mostly through being sent back to lower levels of government[36] (who have primary responsibility for responding, according to the Law on Complaints[37]). Local governments are generally able to resolve disputes between citizens, but not those between citizens and government agencies.[38]

Affected citizens typically press land dispute cases through official channels to higher levels first. If such petitions do not lead to satisfactory outcomes, they may turn to the media or public actions, such as demonstrations in front of government offices in Hanoi, Ho Chi Minh City, and other provincial centers. Security forces allow some protests to continue, but sometimes intervene with force if disputes become widespread or to conduct immediate land clearance.[39] Among the most prominent land conflicts in recent years were the Doan Van Vuon expropriation case in Tien Lang district, Haiphong[40] and construction of the Ecopark new urban area outside Hanoi.[41] Most land conflicts are caused by improper procedures of land acquisition, low levels of compensation, and/or perceived corruption.[42] Few disputes are adjudicated in the courts;[43] instead, the print and online media play a de facto accountability role in holding some government and business land users to account.

The data displayed on the Land Portal is provided by third parties indicated as the data source or as the data provider. The Land Portal team is constantly working to ensure the highest possible standard of data quality and accuracy, yet the data is by its nature approximate and will contain some inaccuracies. The data may contain errors introduced by the data provider(s) and/or by the Land Portal team. In addition, this page allows you to compare data from different sources, but not all indicators are necessarily statistically comparable. The Land Portal Foundation (A) expressly disclaims the accuracy, adequacy, or completeness of any data and (B) shall not be liable for any errors, omissions or other defects in, delays or interruptions in such data, or for any actions taken in reliance thereon. Neither the Land Portal Foundation nor any of its data providers will be liable for any damages relating to your use of the data provided herein.