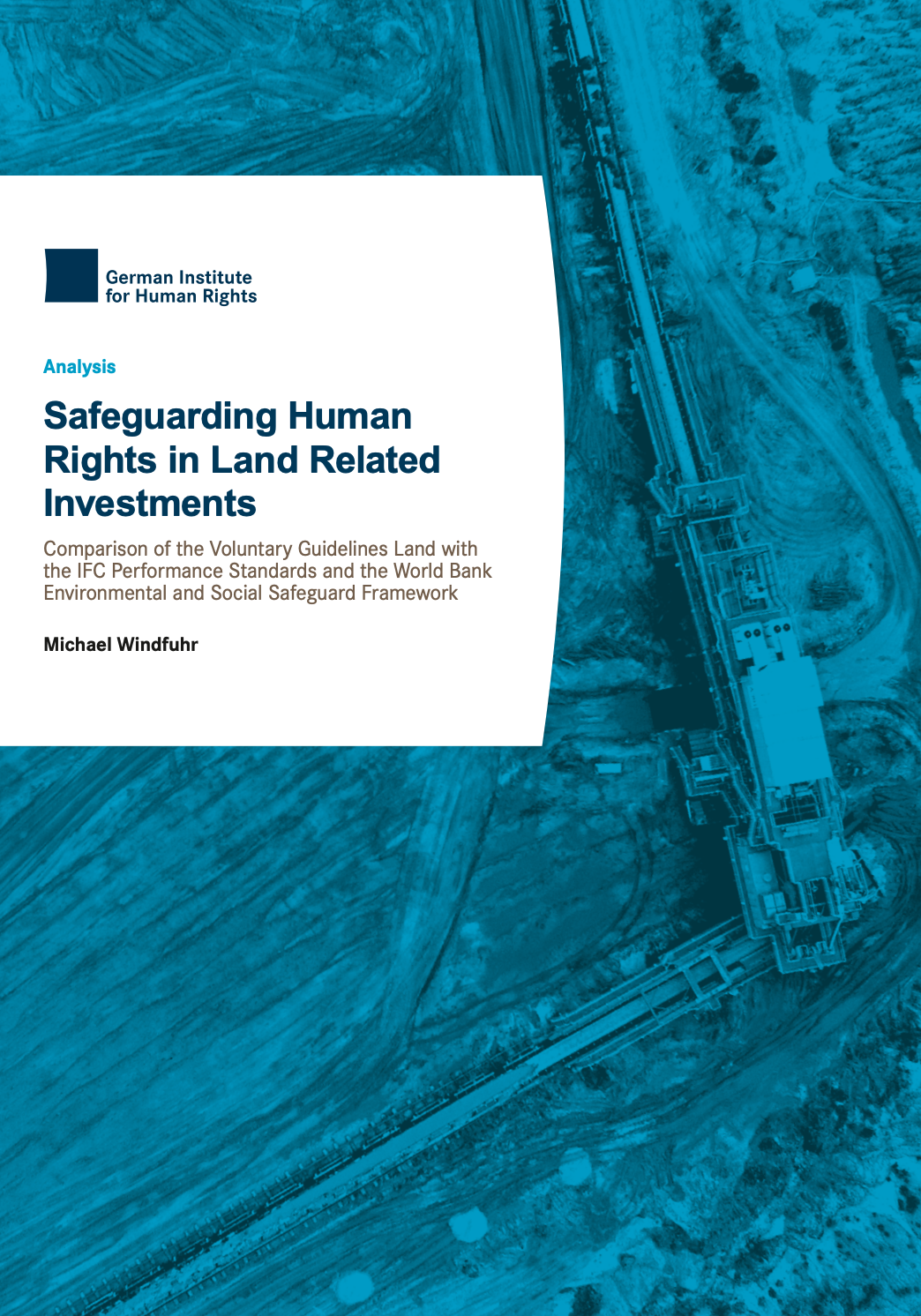 The Voluntary Guidelines on the Responsible Governance of tenure of Land, Fisheries and Forests in the Context of national Food Security (VGGt) represent a new international legal instrument, which was adopted unanimously in 2012 by the United nations Committee on World Food Security (CFS). the Guidelines are a soft law instrument that does not create new, legally binding obligations for states or responsibilities for private actors, but that applies existing governance standards, particularly for human rights, to the management of land.

The document was developed in response to the rapid increase of often large-scale investments in land, which became evident in the years following the 2007/2008 world food crises. Several factors combined to encourage increased investment in land: the difficult supply situation of several staple foods globally was accompanied by traditional food-exporting countries ceasing exports; Sharp price increases made agricultural produce a competitive raw material for the energy sector, fostering increasing demand for biofuels; the price trends for most agricultural products following the crisis encouraged, for the first time in decades, interest in investing in land and agricultural production. the sudden wave of investments immediately caused problems for persons living on or using the land, such as forced or involuntary evictions with inadequate compensation; and non-communication with – and neglected participation of – affected individuals or communities. the term ‘land grabbing’ was introduced by research publications from civil society organisations (CSo) and books that described the trend. the problem started to gain prominence within national and international forums. The Committee on World Food Security (CFS), newly mandated during the world food crises, decided in 2010 to start negotiations on a new legal instrument dealing adequately with the problem. Following two years of intensive international negotiations, the document was finalised and adopted in the CFS.

The relevance of land governance problems resulting from social impacts and conflicts was immediately recognised by governments, which then reacted quickly. As early as 2009, several intergovernmental organisations began a fasttrack process to adopt seven principles for responsible agricultural investment, intended to provide guidance to investors and avoid investments that might cause harm in local agricultural communities. The international organisations reacted particularly quickly to the land-grab debate, as they wished to avoid such discussions negatively influencing investors and the amount of agricultural investment. The fast-track solution was rapidly developed and promoted in order to avoid a more rigid framework in international law. this approach was seen as inadequate by many states and observers, and the idea of developing comprehensive standards for responsible agricultural investment was then also taken up by the CFS in order to formulate a more substantive response to the problems of large-scale land acquisitions. the CFS decided in 2010 to develop the voluntary guidelines, first on responsible tenure of land, fisheries and forests, and later the Principles for Responsible Investment in Agriculture and Food Security. Both texts are much more elaborate than the seven principles from 2009 and were developed through a broad, multi-stakeholder process.

The objective of this study is to compare the content of the VGGt and its related standards to the main frameworks for environmental and social performance standards used in development cooperation and by the private sector. the study compares the VGGt with the IFC PS as well as to the new WB ESF, from August 2016. the study will identify whether there are differences and potential issues in the VGGt that are currently omitted or only partially covered by the IFC PS or the World Bank Safeguards. It will also discuss how potential gaps might be addressed and how development policy actors that apply the IFC PS or the World Bank Safeguards can make use of this study to analyse in how far their own use of policies and standards should address potential gaps. moreover, it will analyse whether there are issues that require closer examination and further investigation.

The German Institute for Human Rights is the independent National Human Rights Institution in Germany. It is accredited according to the Paris Principles of the United Nations (A-status). The Institute’s activities include the provision of advice on policy issues, human rights education, information and documentation, applied research on human rights issues and cooperation with international organizations. It is supported by the German Bundestag.