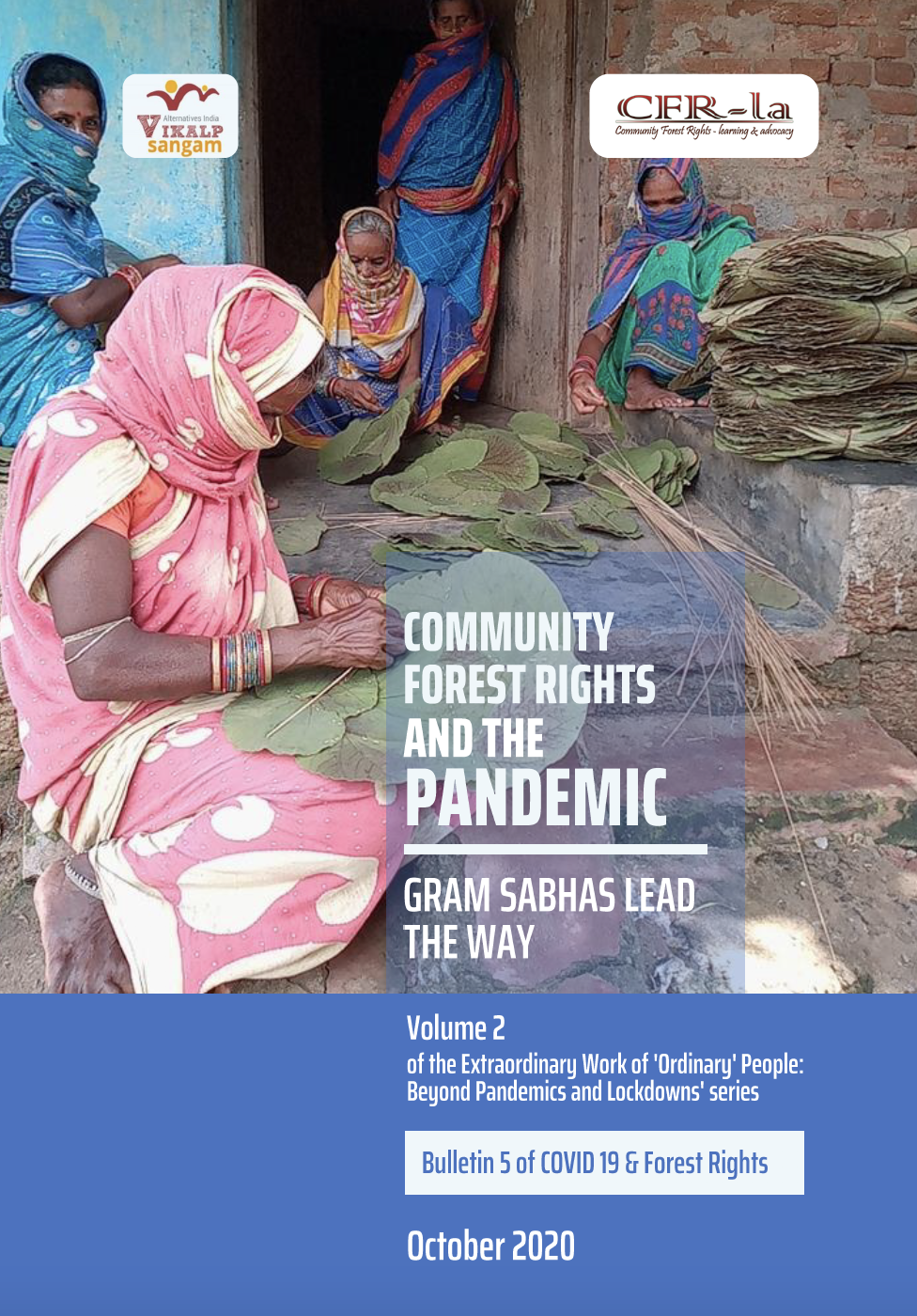 India is currently among the most affected countries by COVID19, recording over 6 million cases, by September 30 2020. The pandemic and lockdown measures have had a drastic impact on a large population of poor and marginalisedcommunities, causing loss of livelihoods and employment, food insecurity and socio-economic distress. Although the severe hardships being faced by migrant workers in India became global news and concern, the Indian government in its monsoon session has respondedsaying it has not maintained the data on lives and jobs lost, because of which no compensation could be provided to them. These migrant workers in all likelihood include Adivasi and Other Traditional Forest Dwellers (OTFD), as these communities often migrate to cities in search of better livelihood options.

Over the course of time, a complete disempowerment of indigenous communities over their traditional ecosystems due to lack of access, use, management and conservation rights; lack of meaningful support for conservation and development of sustainable nature-based livelihood mechanisms; ineffective or poor implementation of welfare schemes such as under the Mahatma Gandhi National Rural Employment Guarantee Act (MGNREGA) -a job guarantee scheme in rural areas; diversion of forest communities’ traditional ecosystems for industrial and mining purposes further disenfranchising them, and often in the face of stiff resistance from them; these are just a handful of reasons causing severe economic, social and ecological crises, including distress outmigration, for Adivasi and OTFDs in India.

As per the findings of a preliminary assessment report, the vulnerabilities, atrocities and injustices that forest communities face due to forest, conservation and economic policies increased many fold during the pandemic.  Lack of tenure security has emerged as one of the  major reasons for the vulnerable situation of the communities. Additionally, certain pre-existing conditions in tribal areas such as severe shortage and lack of basic healthcarefacilities, lack of healthcare professionals, lack of information and awareness, breakdown of traditional health care systems, among others have created greater difficulties and made tribal areas more susceptible to the pandemic. In most areas the lockdown has seriously affected the local livelihoods of the communities. Nearly 100 million forest dwellers depend on various kinds of forest produce for food, shelter, medicines and cash income. The collection season for these however is mainly in the months from April to June which coincided exactly with the lockdown.

Despite these problems, hundreds of examples of Adivasi and OTFD communities’ remarkable resilience in coping with the crisis have also been reported, particularly where they have been de facto or legally empowered. This has been most evident in areas where land and forest rights have been recognisedunder The Scheduled Tribes and Other Traditional Forest Dwellers (Recognition of Forest Rights) Act 2006 (FRA) and Panchayat Extension to Scheduled Areas Act 1996 (PESA)-two laws that recognisethe rights of Adivasis and OTFD communities over their lands and resources. Recognition of these rights in many cases has led to overcoming constraints and crises situations.

This publication is an attempt to document some of these examples that can help us in understanding the coping mechanisms of communities during times of wide scale distress. The case studies present examples which may lead us to an understanding that community empowerment, particularly by ensuring tenure security and devolving natural resource governance and management power, can restore ecosystems, create sustainable economies and community resilience to cope with the natural and human induced calamities such as the COVID19 pandemic.

The name 'Vikalp Sangam' is Hindi for 'Alternatives Confluence'.

As the world hurtles towards greater ecological devastation, inequalities, and social conflicts, the biggest question facing us is: are there alternative ways of meeting human needs and aspirations, without trashing the earth and without leaving half of humanity behind?