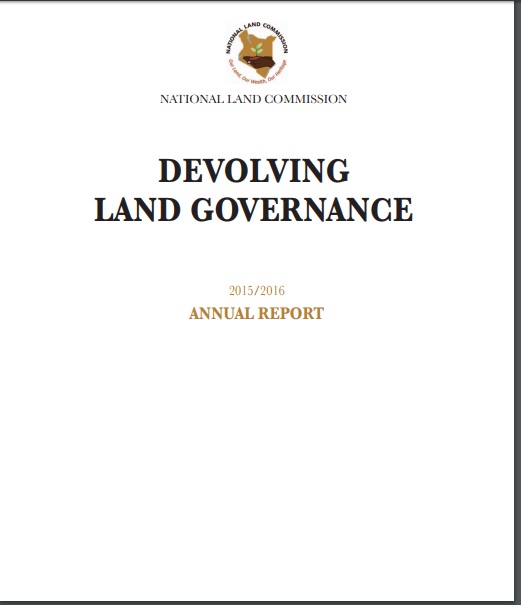 The Commission has been in the forefront of promoting good governance and accountability in the land sector. Progress in the land sector has been mixed. Through the effort of the government, support agencies and other stakeholders the Commission was able to devolve its function to the 47 counties through the County Land Management Boards (CLMBs). The CLMBs have in effect devolved land services throughout Kenya. However, achieving land, better land governance, accountability in the land sector and ensuring secure land rights for all Kenyan is still to be achieved. The target for good governance through the land assessment framework and a National Land Information System as envisaged by the Land Policy Initiative (African Union) is not yet attained. Since its inception, the Commission has prioritized it strategic direction and support to Vision 2030 flagship projects by way of acquiring land for major land - based investments that are aimed at achieving equity in economic development. A major project that the Commission has been involved in actively is the Standard Gauge Railway project. There continue to be many other projects that the Commission engages in numerous compulsory acquisition of land for various projects both for the National and County Governments. The Commission has been able to carry out valuation on the affected parcels of land and ensured just and fair compensation to the affected landowners, in collaboration with the acquiring bodies eg KURA; KeNHA; Ministry of Water and Irrigation. A case in point is the acquisition of land for the LAPSSET corridor. This project is the first single Gigantic, Integrated, Transformative and GameChanging infrastructure Project the Government has initiated and prepared under Vision 2030 Strategy Framework without external assistance. The project involves the development of a new transport corridor from the new port at Lamu to Ethiopia and Southern Sudan. This will comprise of a new road network, a railway line, oil refinery at Lamu, oil pipeline, Lamu Airport and XIV Devolving Land Governance free port at Lamu (Manda Bay) in addition to resort cities at the coast and in Isiolo. These developmental projects will form the backbone for opening up Northern Kenya and integrating it into the national economy. Other projects undertaken are water dams eg Koru Dam and power transmission lines, which have transformed Kenya and regional socio-economic landscape. The Government of Kenya is currently investing in improving land administration with the aim of developing an efficient land market. A side objective is to reduce conflicts on land through implementation of a functioning land-registration and/or cadastral system. Experience teaches that additional preventative measures are required, such as conflict and dispute resolution on land, and efficient land management practices. Not even a perfect land market can prevent conflicts unless regulated by effective land procedures and enforced by relevant governing institutions. In attending to these concerns the Commission conducted successful advocacy programs that targeted concerns such as land related conflicts resolutions among communities, investors and between institutions. Additionally the Commission conducted successful review of grants and dispositions of public land that culminated in restoration of land and promoted secure land rights for public institutions. A case in point is the revocation of titles of ranches in Lamu and disputes involving Government housing quarters and settlement schemes. Disputes have continued to delay implementation of major projects in the country. The Commission continues to work extensively on providing secure land rights through handing disputes on land and ensuring that its efforts to help increase security of tenure to all are centered on the principles of land administration and management. The School-titling program has reached over 7,000 schools in Kenya and brings together stakeholders from the Lands and Education Sector in a bid to accelerate the protection of public school land. Grabbing of public school land jeopardises the realisation of fundamental principles and rights within the constitution of Kenya including the right of children to free and compulsory education. The Commission is currently processing over 2,000 school applications for registration following a presidential directive to Ministry Of Lands and Physical planning and NLC to register all schools. The continued good working relationship with Ministry of Lands and Physical planning is a sign that land reform agenda is in course in the country. XV Similarly the Commission has collaborated with various stakeholders including Counties, Universities and land non-state actors in advancing land reforms. The Commission has continued to work with various stakeholders including the Universities counties and non-state actors in advancing land reforms in Kenya. In partnership with FAO the Commission is in the process of implementing a project to support land and Natural resources Governance in communal lands of Kenya. Going forward there is need for to further accelerate progress towards securing land rights for all and in particular give priority to the rights of women, youth and persons living with disability (PLWDs). In 2016/2017 the Commission will support a focus on enhancing Land Information Management System, which will provide an accurate, current and reliable land record cadaster. Additionally, the Commission will enhance participatory and inclusive research, knowledge management, partnership, and advocacy in order that equitable land rights may be attained. The Commission will also emphasize a re-focus on the use of ADR mechanisms in solving land concerns on equity based approaches, reducing costs and improving the sustainability of land use. Further dealing with emerging issues e.g. inadequate funding; demographic shifts and urbanization, climate change, natural resources and the extractive industries and continuing to improve the land rights and secure land tenure.

Excellent administration and management of land for sustainable development

MISSION: To contribute to improved livelihoods through offering a bridge between communities, stakeholders and policy makers in the promotion of equitable access and sustainable management of land and natural resources.

VISION: To become a centre of excellence in promoting the application of appropriate land policies, laws and management practices by empowering society through innovative and knowledge based advocacy and capacity building in Kenya and the region.

LDGI values of Integrity, Trust and Professionalism influence the way we work every day and everywhere.