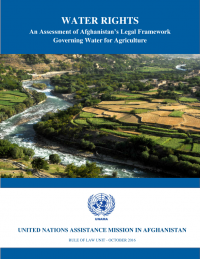 But, decades of conflict combined with deteriorating infrastructures and prolonged droughts have hindered the agricultural sector’s ability to advance. Agricultural development remains largely dependent on weather conditions in any given year. The vast majority (82%) of water for agriculture is derived from surface water sources, which rise or fall depending on rainfall or snowmelt. The remaining 18% is from groundwater sources, which are experiencing rapidly decreasing water levels.

Constraints on the natural supply of water are exacerbated by structural inefficiencies that fail to adequately harness water sources and maximize utilization for agricultural output. Years of conflict have destroyed or disrupted maintenance of Afghanistan’s centuries-old irrigation systems, thereby reducing overall efficiency and hindering economic development of the agricultural sector.

The demand for water to support agricultural development often results in disputes over water rights, which are derived from guarantees secured by Afghanistan’s Constitution, statutory laws, Islamic law, and traditional customs and practices. The stakes involved in these disputes are high as many rural communities depend on reliable access to water sources to grow the crops and nourish the livestock on which their lives and livelihoods depend.

In Afghanistan, both formal and informal means are used to resolve these disputes. The Water Law enacted in 2009 anticipates a complex regulatory regime controlled by government ministries with strong stakeholder participation from local water users. This formal mechanism is supplemented by traditional customs and practices coalesced around the local water master’s or mirab’s longstanding authority and community respect in relation to water rights. During 2015, UNAMA Rule of Law began a field study to assess the effectiveness of these dispute resolution mechanisms. This report summarizes the results of this field study and provides practical recommendations to facilitate the resolution of disputes relating to access to water for agriculture in a timely manner and without escalation to violence. One key finding is that, notwithstanding the Water Law’s comprehensive regulatory scheme, water users continue to rely exclusively or, at least, predominately on local water masters to resolve disputes. There are several reasons for this divergence in the use of formal versus informal dispute resolution mechanisms:

Although most persons surveyed expressed satisfaction with informal means of dispute resolution, concerns remain about the lack of transparency and consistency in the rules or practices being applied. The lack of transparency and absence of established practices governing customary water rights renders informal dispute mechanisms vulnerable to external influences and pressures. These concerns are particularly relevant to disenfranchised groups such as women and children whose voices often are not heard in Afghanistan’s traditionally male-dominated society.

UNAMA is a political mission that provides political good offices in Afghanistan; works with and supports the government; supports the process of peace and reconciliation; monitors and promotes human rights and the protection of civilians in armed conflict; promotes good governance; and encourages regional cooperation.

UNAMA is a political mission that provides political good offices in Afghanistan; works with and supports the government; supports the process of peace and reconciliation; monitors and promotes human rights and the protection of civilians in armed conflict; promotes good governance; and encourages regional cooperation.