Argentina’s president once talked of forcing slums out of the city – now he wants to deliver residents the deeds to their land. But will it help?

“It was really bad in there – I mean, it’s literally a ruin,” says Romina Vargas of Argentina’s most famous abandoned building, where she once lived. “There was lots of contaminated water on the lower floors, there were no sewers, and kids would come and take drugs inside. It’s good that it’s coming down.”

Built in the 1930s and later championed by president Juan Domingo Perón, the 14-storey building in south-west Buenos Aires was intended to be the largest hospital in Latin America; a cornerstone of Perón’s grand populist vision for Argentina. But construction stopped abruptly in 1955 with a military coup. The abandoned colossus at the edge of the capital became known as the White Elephant.

Vargas is one of thousands of poor Argentines and immigrants who later moved into the building and its surrounding area, creating a ballooning slum, or villa. When the government built a wall to hide the villa from the international media during the 1978 World Cup, it was nicknamed “the Hidden City”. Today it is home to around 24,000 people and in 2012 was the subject of a film starring Ricardo Darín, one of Argentina’s best-known actors.

Both the White Elephant and the Hidden City represent the failure of successive governments to tackle Argentina’s 4,228 informal neighbourhoods and improve the lives of their 3.5 million residents. But the incumbent president, Mauricio Macri, is attempting to take a different route. 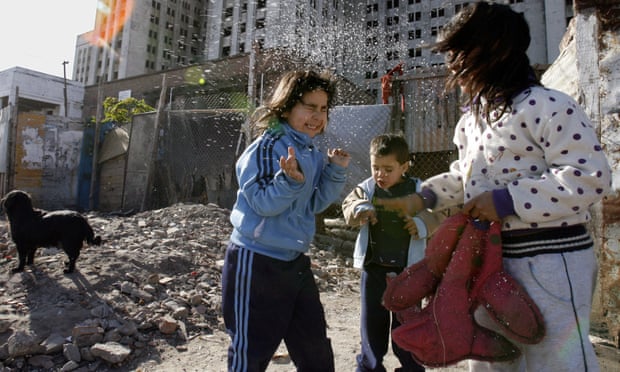 The demolition of the White Elephant started in April and is expected to take six months, as construction crews work brick by brick to avoid endangering the Hidden City. It is among a raft of measures from Macri’s government, whose flagship policy is a highly ambitious plan to expropriate the land on which the villas lie – an estimated 60% of which is privately owned – and give it to the residents.

For Macri, who had previously discussed forcibly moving villas out of the city, it is a surprisingly progressive strategy. The social development minister, Carolina Stanley, promised in May that the plan would mean “the settling of a historical debt”.

“It sounds like a great idea,” says Ana Utus, a Bolivian immigrant who has lived in a southern Buenos Aires villa for 13 years. “A lot of us here, including me, bought our homes from someone else – so we’ve got money invested.

“I’ve been through a lot here. I have two 10-year-olds and this is their home so it would be nice to have the deeds. There is a lot of crime and our homes are precarious. But hey, it’s where we live.”

On the site of the White Elephant, the government will build a headquarters for the Department of Human Development and Habitat – a modern building, full of glass and greenery, and a symbol of the government’s will to make a difference to Argentina’s massive informal housing sector.

But for Ramiro dos Santos Freire, a public defender who represented Vargas and other Hidden City residents forced to move out before the project, it represents the government’s autocratic approach.

“It shows how little they consult and inform villa residents when they make decisions. That building could have been proper housing, or a hospital, or a school – all of which the neighbourhood needs badly,” he says. “That lack of consultation is the common thread in all the government’s urbanisation schemes.” 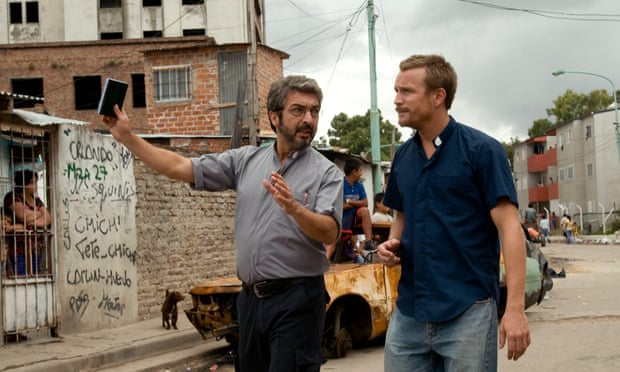 When the city government announced plans to move the White Elephant’s residents out, it claimed about 40 families were living in the area; a census carried out by Santos’ team found 153. “The community was kind of invisible, they couldn’t really demand their rights,” he says. The information allowed him to help secure compensation for the families – but, they say, the government’s support ended there.

“The government didn’t help us, they just gave us a bit of money and a certain amount of time and said get out,” says Vargas, 32. She lived most of her life beside the building with her three children, and has now moved to a different area of the villa. “We ended up here because of a lack of money and education, so we can’t afford to move anywhere else.”

About five families are still living around the White Elephant as the construction begins, including Maria de Los Angeles, 38. “I’m really sad because I’ve been living here for 20 years,” she says. “Now they’re working on top of us. But the compensation the government offered was not enough to buy a new house.”

For Magdalena García Pena, who works at Pilares, an NGO involved with several Buenos Aires villas, the plan to give the land to villa residents is the first step for transforming life in the villa. “But from our experience, they’ll really need a more comprehensive approach,” she adds. “They need to work on economic and labour conditions, housing, health, diet, education, safety.”

“Urbanisation can’t just be giving out deeds,” agrees Dos Santos. “They always hold up Los Piletones [in south Buenos Aires] as an example of an urbanised villa. They’re really proud of it. But when you go there they have problems with the water network, they’re not connected to the sewers, they don’t have waste collected. It’s half-urbanised. It’s not really woven into the urban fabric of the city. ”

Full integration of the villas will be a taller order when infrastructure improvements are made on a case-by-case basis. An estimated 99% of the villas are not connected to the sewer system, 94% lack running water and 70% have no electricity.

In Los Piletones, too, residents were against being handed the official deeds, says Dos Santos – “because that could mean that people start selling their land, and then the neighbourhood is at the mercy of the market. And the market will have an expulsive effect on the poorest. The poorest people could start losing their homes and going to live in places even worse than this.”

Pena points out that there are elements of the villa that deserve protection from market forces. “They have codes between neighbours that you don’t get in there rest of the city – women who will look after their neighbour’s kids so they can go work, neighbours who get together to refurbish parts of the neighbourhood that the state doesn’t reach.

“And they use public space in a special way. The street is an extension of the home, not just a transit space.”

Some have suggested the state should take ownership of the land and lease it to the residents, so that the villas can improve while avoiding market-driven gentrification.

But both Dos Santos and Pena have seen a marked improvement in the government’s strategy on the villas in recent years. In 2016 it compiled a National Register of Working Class Neighbourhoods, mapping the location and conditions of thousands of villas. It forms the basis for the social development minister’s urbanisation plan, presented earlier this month to tentative support from the opposition, which expressed reservations about the timeframe and budget given the potential for the International Monetary Fund to impose austerity plans on Argentina in exchange for a recently announced credit line.

Juan Grabois, director of the trade union that helped the government build the register, told La Nación newspaper the government would need to spend 2.6% of the entire national budget for at least six years to urbanise all the neighbourhoods.

“We’re going to need a lot of political will to actually urbanise everything, which is difficult because we’re a very fragmented society,” says Dos Santos. “People live separately in the same city … even where the physical border is just a street.

“There are many people who will never go into a slum, so they can have a whole series of prejudices about them – and we need support from everyone.”