In the hills of northern Sikkim in northeast India, the Drokpa community live peaceful yet difficult lives. The hills resound with the songs the Drokpas have for every activity. These are not your usual villagers who reside in the same place for decades and have a set source of livelihood. Rather, the Drokpas, as their name suggests are nomads—“drokpa” is a Tibetan word that can be roughly translated as “nomad” or “high pastoral people”. For the last several generations, however, the Drokpas have followed an occupation that might soon disappear from Sikkim: herding yak.

Yak herders in Sikkim have faced many challenges, such as climate change, border restrictions, scarce facilities, economic uncertainty and the attraction of an easier and more comfortable living in a town. These challenges have escalated since the 1960s, when Tibet’s borders were closed. Continuing life as a Drokpa yak herder is an uphill task, as a result of which a dwindling number of people are ready to continue this life willingly.

Before 1962, the Drokpas, originally from Tibet, migrated annually from Tibet to the northern areas of Sikkim to graze their yaks. In the winter months, they would settle temporarily in Tibet near Khampa Dzong, where the pasture grass would be longer, more nutritious and would not get compressed by snow. In the summer, they would travel south to the hilly areas of northern Sikkim, settling briefly in areas like Dongkung, Lungma, Kerang and Lachen in Sikkim. In those areas, the Lachenpas of the Lachen Valley would engage in trade with the Drokpas that was beneficial not just monetarily, but also culturally. This trade fostered cultural exchange and promoted peace between the two communities. The Drokpas would in return look after the livestock of the Lachenpas and would sell the surplus left over after supplying their own close-knit community with yak milk, milk products and wool obtained from the livestock. This exchange was facilitated by the accord between Tibet and India, and by the borders being open for the Drokpas to roam freely.

After China occupied Tibet the border was closed, and in 1962 the Drokpas were forced to settle on either side. Since then, the Drokpas have had to limit their migrations to one region in both winter and summer. Dr Anna Balikci Denjongpa, Research Coordinator at The Namgyal Institute of Tibetology in Sikkim, explained that the Drokpas maintain that before the border was closed there were about 1,000 yaks that would migrate for their rotational grazing pattern. At present, there are fewer than 12 families living the traditional Drokpa yak herding lifestyle. Others in the community have found different occupations and most have tried to settle in towns or cities. 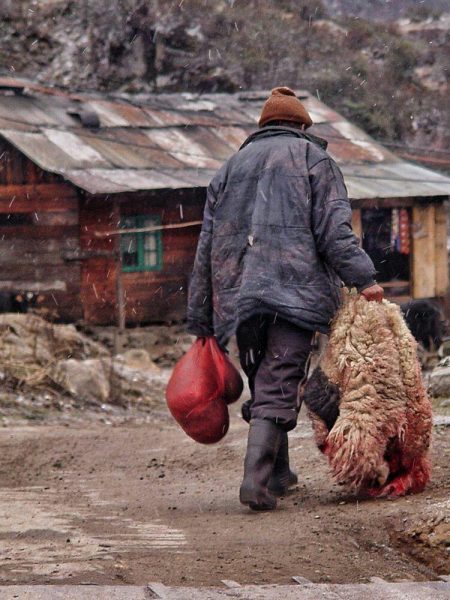 A member of the Drokpa community with sheepskin in Lachen village. PHOTO: Karchoong Diyali. Used with permission.

The traditional Drokpa lifestyle is not an easy one. With movement restricted to the state of Sikkim, they face harsh weather conditions in winter, as the northern mountainous areas of Sikkim experience heavy snowfall at times, compromising the green pasture cover that is beneficial to the yaks.

“When it snows, it is very difficult for the animals as well as for us,” explains Aie Chezum in a film made by The Namgyal Institue of Tibetology titled “Drokpa—Grazing on the Border—The YakHerders of North Sikkim.”

The Drokpas have to depend on dried meat during the winters. But increasing heat is a problem as well. According to meteorological data, Sikkim is getting warmer by an average of 2.5 C every year. This has resulted in the thinning of the grass, and for high-altitude yaks, the heat causes discomfort. Malnourished animals end up being a burden, with the Drokpas having to resort to selling them or feeding them with prepared fodder since grass is covered with snow during winters. This means having to bear the additional expense of buying fodder. For this traditionally self-sustaining community, these are comparatively novel economic concepts, as they have always relied on trade for their necessities and supplies.

Since the border was closed the community has also had to rely on the army for medical assistance in this difficult terrain, though for more serious ailments even the army cannot provide help. In such cases, basic survival becomes precarious.

To understand the Drokpas, one needs to remember that yaks are central the community’s self-sustaining lifestyle, providing wool and the milk from which they make various products as well as dung, which is dried and used as fuel. From the wool, they make items such as socks, clothes and carpets. In earlier times they would also weave expensive garments called the sheema and puruk that were worn mostly in Tibet and were a commodity of trade. Due to the border restrictions, most trading activity has come to a halt. The milk from the yaks is used mainly for tea—known in the region as chai—in winter and used to make products like cheese in the summer. After fulfilling their own supply of dairy products, surplus cheese has traditionally been sold in the towns, though according to one shop owner in Gangtok, it is now something of a rarity.

After all these years, the Drokpas are still looked upon as guests and not as the residents of the area. They are trapped due to the border restrictions and have to tread carefully, not just because their livestock might step on to a minefield, but also because they have to abide by rules and regulations imposed by the host communities.

An uncertain future for the yak herding occupation

Yet through all of this, some Drokpas do manage to make a decent living. They bridge the gap by looking after the livestock of the Sikkim villagers from the Lachen valley and by doing odd jobs for members of the army. In addition to fodder for the livestock, clothes, food and other necessities, another expense many Drokpas now bear is the cost of their children’s education. Many have opted for their children to attend schools in towns or cities, from where, once they become educated and get a taste of urban life, they often refuse to return and take up the arduous lifestyle associated with yak herding. “When all else fails, becoming a Drokpa is the last resort for them,” explains Dr Anna Balikci Denzongpa. Young Drokpa men also shun the occupation of yak herding as they would likely not find brides who would accept that profession.

Those who give up on the profession of yak herding end up taking jobs in the army, the government, or other city-based occupations. With Sikkim lately witnessing a surge of tourism, jobs in that sector are also in demand. A last resort for people who do not find jobs is to settle in the Tibetan refugee camps. The help provided by the Government is not enough encouragement for young people to continue the traditional Drokpa lifestyle, nor is the interest shown by a few NGOs.

In spite of all of this, there are still those who continue to follow the traditional occupation and live the life of yak herders in the hilly mountain ranges of Sikkim. But even those who brave the harsh conditions in order to do this are aware of the fact that their children might opt to sell off their livestock and settle down in cities, pursuing other jobs. This particular generation could well be writing the last chapter in the story of yak herding by the Drokpas in Sikkim.