When more than 1,200 land rights experts converge on the World Bank’s Washington, DC headquarters today for the 18th Annual Land and Poverty Conference, participants from government, civil society groups, private sector and donor agencies will focus on how they can use data and other evidence to reform land policies, identify strategies for expansion and find ways to monitor progress.

While conference participants from around the world have in previous years presented and discussed new information on individual private property rights and state land, here are some important numbers about Indigenous and community land rights, the world’s most common form of tenure.

The proportion of the world’s land held by Indigenous Peoples and other local communities.

The precise amount of communal land is not known, but many experts argue that at least half of the world’s land is held by Indigenous Peoples and other communities. Some estimates are as high as 65 percent or more of the global land area. Indigenous Peoples hold an estimated 20 percent of the Earth’s land mass, one-half to one-third of the world’s collectively-held land. Communal land is found in all continents of the world except Antarctica, with the largest area located in Africa. LandMark, the global platform of indigenous and community lands, provides maps and other critical information on these lands.

The number of people who depend on indigenous and community land.

Up to 2.5 billion men, women and children, including more than 370 million indigenous people, rely on land, natural resources and ecosystems – forests, rangeland and wetlands - that are held, used or managed collectively. With a current world population of about 7.5 billion people, about one in three people is dependent on communal land for their wellbeing and livelihood.

The share of the world’s land legally owned by Indigenous Peoples and other communities.

Globally, Indigenous Peoples and local communities have formal legal ownership of 10 percent of the land, and have some degree of government-recognized management rights over an additional 8 percent. Two-thirds of the global land owned or controlled by communities is in five countries: China, Canada, Brazil, Australia and Mexico. That means at least one-third to one-half of the world’s land is held by Indigenous Peoples and local communities informally, under customary tenure arrangements alone. Without legal recognition, Indigenous Peoples, communities and their lands are “vulnerable to illegal, forced or otherwise unjust expropriation, capture and displacement by more powerful interests.” 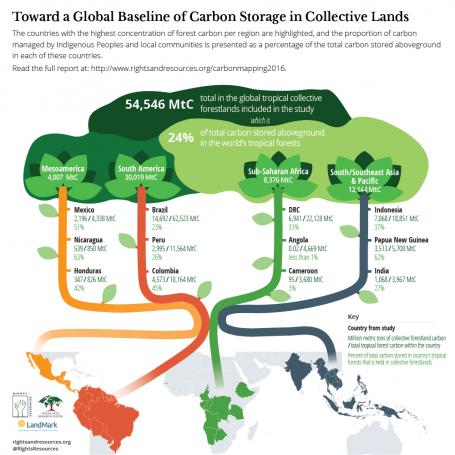 The amount of climate-warming carbon stored in collectively-held tropical forests.

At least 24 percent of the carbon stored above ground in the world’s tropical forests (not counting the carbon stored in the soil) is in the collectively-managed lands of Indigenous Peoples and local communities. Indigenous and community lands contain at least 54,546 million metric tons of carbon (MtC), equivalent to four times the total global carbon emissions in 2014. One-tenth of the total carbon contained above ground in tropical forests—22,322 MtC—is in collectively managed areas that lack formal, legal recognition. Considerable carbon is also stored in indigenous and community lands that is not tropical forestland. In addition to carbon sequestration, indigenous and community lands also protect other ecosystems that provide critical local, regional and global ecosystem services. For example, most of the world’s forests are found on communal lands, and indigenous lands alone hold 80 percent of the planet’s biodiversity. 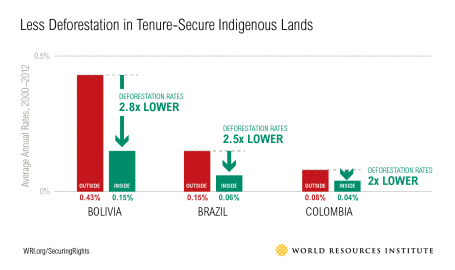 The costs of securing indigenous lands in the Amazon as a percentage of total benefits derived from these lands.

In Amazonian countries, the cost of securing indigenous lands amounts to less than 1 percent of the total environmental benefits derived from these lands. Secure indigenous lands provide important and valuable ecosystem services, including regulation of local climate dynamics and water cycling, carbon sequestration, and recreation and tourism. In Bolivia, Brazil and Colombia, these benefits are estimated to range between $1845 to $4158 per acre or a total of $679 billion to $1,530 billion for the next 20 years (and considerably more if social and economic benefits are included). In contrast, investments in tenure security are estimated at only $18.21 per acre in Bolivia, $27.52 per acre in Brazil, and $2.43 per acre in Colombia (the calculated sum of discounted total costs for a 20-year period). Tenure-secure indigenous lands provide low-cost forest conservation investments for governments.

These numbers speak for themselves: formal government recognition of collectively-held lands makes economic, environmental and societal sense. Governments and their partners should support Indigenous Peoples and other communities to protect and safeguard their lands.

Related content:
SDGi
Proportion of total adult population with secure tenure rights to land, with legally recognized documentation and who perceive their rights to land as secure, by sex and by type of tenure.