When bulldozers rolled into their forest at the start of last year, the Ekuri community in southeast Nigeria protested: "Indigenes say no!"

They didn't want a superhighway that would wipe their ancestral lands in the Cross River National Park off the map.

Under pressure, the earthmovers left to do their work elsewhere.

But community spokesman Martin Egot said: "They destroyed all the crops, the source of our wealth: cassava, cocoa, plantain... ."

At nearly 4,000 square kilometres (1,500 square miles), the Cross River National Park is the biggest forest in Nigeria, a paradise of endangered gorillas, elephants and other species.

In Africa's most populous nation, the countryside has increasingly been tamed by rampant urbanisation, forest management and poaching.

"Our fathers, our grandfathers used to live in this forest before us and we value what we inherited. It gives us all that we need," said Egot.

The isolated Ekuri—who live in the middle of the forest—have been fighting for 30 years to maintain their lifestyle of sustainable subsistence farming.

The mammoth road project threatened to strip more than 50,000 people of their land rights and their homes. 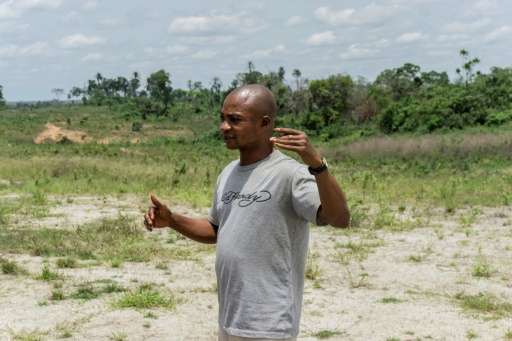 Trees and villages were to have been razed in a corridor 20 kilometres wide, which environmentalists said would have been an "ecological disaster".

The Wildlife Conservation Society (WCS) has criticised the lack of transparency and consultation on the project by the Cross River state government.

It "could allow developers to cut down, burn and replant one of Africa's oldest intact rainforests with palm oil or other farming", the environmental charity added.

For the last year those for and against the superhighway have been locked in a power struggle.

The project's main backer, Cross River state governor Ben Ayade, has repeatedly vaunted the future economic benefits of linking Calabar with the rest of the country.

"How will this state grow, how will we continue to sustain the payment of salaries, how will we manage our demographics, with 80 percent of our population below the age of 35?" he said in March.

"God made those plants and animals for us and not the reverse. You must have a delicate balance between development and environmental protection."

Against it, two petitions have garnered more than 350,000 signatures, leading Nigeria's President Muhammadu Buhari to suspend the project pending an environmental impact survey.

After stormy negotiations, the road's route was changed to spare some of the communities and endemic species under threat.

The 20-km wide corridor has also been significantly reduced.

Few environmentalists are convinced, however.

"It's a first step," Odey Oyama, the head of the Rainforest Resource and Development Centre (RRDC) in Calabar, told AFP.

"But the superhighway is still crossing the park, which is completely unacceptable."

The environmental activist said he had received a number of death threats because of his opposition to the road and the uncontrolled expansion of the palm oil industry in the region.

But he has not been deterred from taking powerful multinationals to court.

The damage, in part, may have already been done.

Friends of the Earth in 2015 accused Wilmar of having expanded its activities into the national park and other protected areas, where thousands of hectares have already allegedly been deforested.

The company has said its acquisition was legitimate and that it "categorically" refutes claims of encroachment on to the park.

Logging is of particular interest to companies working in the area, according to one environmentalist.

"The park is home to an abundance of valuable timber. That is a lot of money," said the activist, on condition of anonymity.

According to a map drawn up by WCS from satellite images, other companies such as Dansa Agro Allied, which specialises in pineapple plantations, are also operating illegally in the park.

The company is a subsidiary of the Dangote Group, owned by Africa's richest man Aliko Dangote.

The firms themselves reject the claims, asserting that their activities respect international environmental standards and have created thousands of jobs.

Dansa's lawyers have said the company has no operations in the park and has supported its conservation.

The fate of the superhighway remains on hold pending the final decision of the Abuja authorities, expected in the coming weeks.

It also continues to divide locals, where some villagers support the project enthusiastically.

Glory sat on a makeshift stool at the side of a rutted track having her long hair braided.

"We have no good roads, no good water, no electricity, we are suffering a lot," she complained. "The superhighway will help us."

The signs of poverty are everywhere in Obung, a village of houses with roofs of corrugated iron sheets that lies on the park's southern flanks.

Like elsewhere, recession has hit hard and the few employers in the remote region have packed up and left months ago.

Obung's inhabitants are hanging on to the governor's promises to bring modern life to the village.

"The national park didn't bring anything to us. We cannot hunt anymore, we cannot cut timber anymore, we don't have anything to do again," said the village chief, Ntufam Igne.

"With the superhighway, Obung will become a big city. We pray for it."

Related content:
SDGi
Proportion of important sites for terrestrial and freshwater biodiversity that are covered by protected areas, by ecosystem type

This indicator is currently classified as Tier I. The United Nations Environment Programme (UNEP) is the Custodian agency for this indicator.