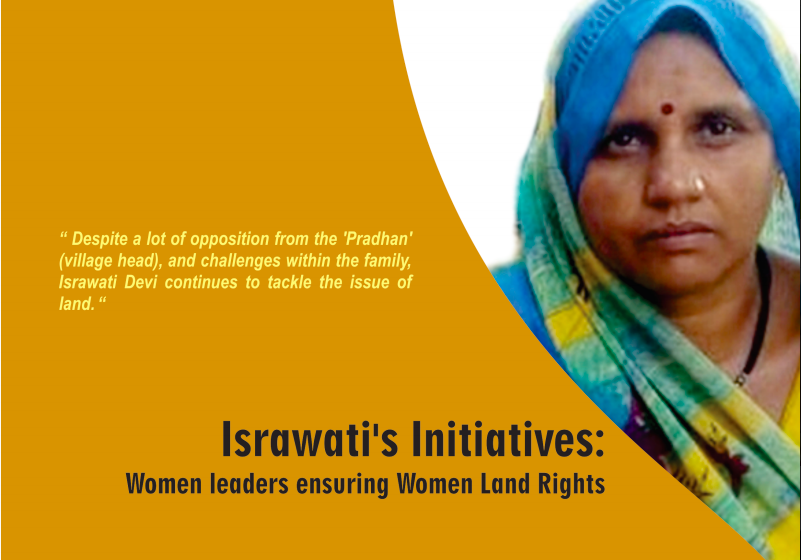 For the elderly in the village Chittpur, Israwati Devi is a much loved daughter-in-law.  For the village’s fellow women, she is a ‘sister’ always ready to guide them. For the young girls, she is an example of a strong and fearless woman. From Panchayat leaders, to block and sub-district officials, many consult her to support in their development initiatives.

In Uttar Pradesh- India, where there is a sharp disconnect between land and women, Landesa initiated the Women Leadership Development Program, to change the narrative by developing women leaders who can advocate and strengthen the land rights of the poor and women.

Israwati Devi, who was an elected representative from her ward in the village of Chhitpur, showed interest and participated in the programme. She was convinced that land is valuable, especially in the lives of women, but was skeptical as to whether she would be able to do something to improve the situation. As part of the program, she attended all the classroom sessions and received on-field support from Landesa’s Field Officers. She also got a chance to interact with government officials through the exposure visit and gained confidence to take up the land allocation work in her village.

As learnt in the training, she carried out a survey to identify eligible landless families in her ward. She also convinced other ward members, especially women, to conduct a similar survey in their respective wards, within 20-25 days the survey was completed. She then held several conversations with revenue officials and the village head to conduct the meeting of Land Management Committee, and ensured the presence of fellow villagers. Along with peer women, she played an active role in facilitating the LMC meeting and advocating land allocation to the deserving ones.  Since then she has been tirelessly advocating with the revenue officials to take the process forward.

“Initially when I stepped out from home, the community was not supportive, but I never gave up. The training has given me the confidence to go to several offices and help fellow women’’. Today, the community appreciates her efforts and has great expectations from Israwati Devi.

Despite a lot of opposition from the ‘Pradhan’ (village head), and challenges within the family, Israwati Devi continues to tackle the issue of land. Several other participants of the leadership program are taking on similar initiatives. In a context where women’s presence in revenue offices are unheard of, and their participation in land based conversations is severely limited, these women are making strong leaps forward for change.

“The officials now know that women have their own separate identity. If there is any need related to our Gram Panchayat, they talk directly with me and others on the phone. If Landesa continues its support, we will go far ahead,” adds Israwati Devi.