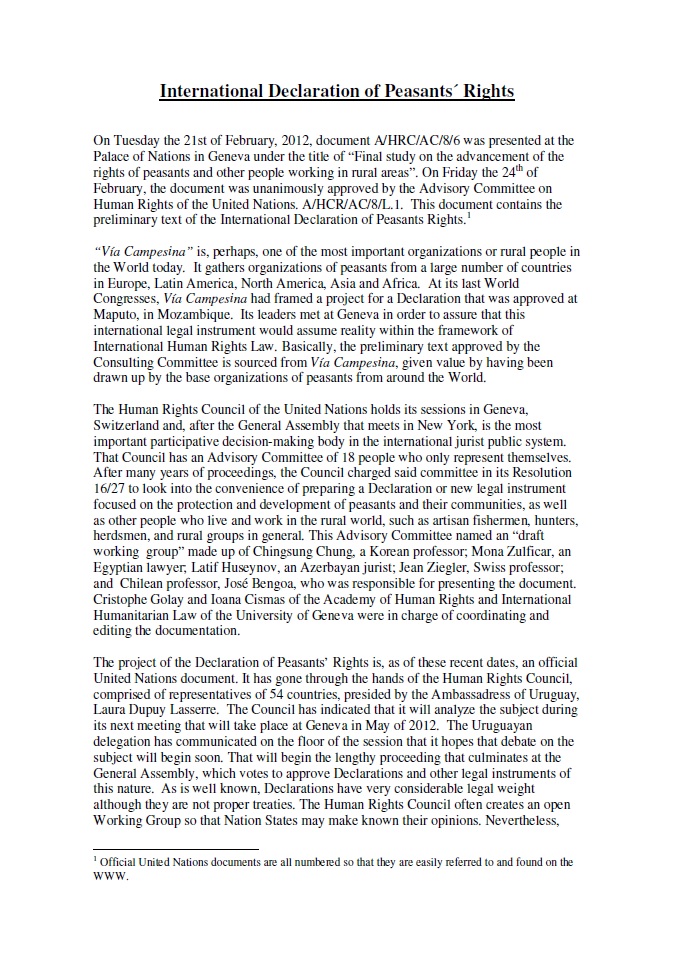 [From FIAN] On Tuesday the 21st of February, 2012, document A/HRC/AC/8/6 was presented at the Palace of Nations in Geneva under the title of “Final study on the advancement of the rights of peasants and other people working in rural areas”. On Friday the 24th of February, the document was unanimously approved by the Advisory Committee on Human Rights of the United Nations. A/HCR/AC/8/L.1. This document contains the preliminary text of the International Declaration of Peasants Rights.

“Vía Campesina” is, perhaps, one of the most important organizations or rural people in the World today. It gathers organizations of peasants from a large number of countries in Europe, Latin America, North America, Asia and Africa. At its last World Congresses, Vía Campesina had framed a project for a Declaration that was approved at Maputo, in Mozambique. Its leaders met at Geneva in order to assure that this international legal instrument would assume reality within the framework of International Human Rights Law. Basically, the preliminary text approved by the Consulting Committee is sourced from Vía Campesina, given value by having been drawn up by the base organizations of peasants from around the World.

The Human Rights Council of the United Nations holds its sessions in Geneva, Switzerland and, after the General Assembly that meets in New York, is the most important participative decision-making body in the international jurist public system. That Council has an Advisory Committee of 18 people who only represent themselves. After many years of proceedings, the Council charged said committee in its Resolution 16/27 to look into the convenience of preparing a Declaration or new legal instrument focused on the protection and development of peasants and their communities, as well as other people who live and work in the rural world, such as artisan fishermen, hunters, herdsmen, and rural groups in general. This Advisory Committee named an “draft working group” made up of Chingsung Chung, a Korean professor; Mona Zulficar, an Egyptian lawyer; Latif Huseynov, an Azerbayan jurist; Jean Ziegler, Swiss professor; and Chilean professor, José Bengoa, who was responsible for presenting the document. Cristophe Golay and Ioana Cismas of the Academy of Human Rights and International Humanitarian Law of the University of Geneva were in charge of coordinating and editing the documentation.

The project of the Declaration of Peasants’ Rights is, as of these recent dates, an official United Nations document. It has gone through the hands of the Human Rights Council, comprised of representatives of 54 countries, presided by the Ambassadress of Uruguay, Laura Dupuy Lasserre. The Council has indicated that it will analyze the subject during its next meeting that will take place at Geneva in May of 2012. The Uruguayan delegation has communicated on the floor of the session that it hopes that debate on the subject will begin soon. That will begin the lengthy proceeding that culminates at the General Assembly, which votes to approve Declarations and other legal instruments of this nature. As is well known, Declarations have very considerable legal weight although they are not proper treaties. The Human Rights Council often creates an open Working Group so that Nation States may make known their opinions. Nevertheless, when this sort of instrument is formally presented for public debate at the forum of international law, its content and proposals may well be considered as a reference to level of the standards that are being debated and an orientation of the policies to be undertaken.

At the afore-mentioned session, the peasant leader from the autonomous community of Aragon in Spain and leader participant in Vía Campesina, Mr. Javier Sánchez Anso - after complimenting the Advisory Committee on their work - pointed out that “secure access to and control over the land and its productive resources are linked intrinsically to the enjoyment of the Rights determined by the Universal Declaration of Human Rights”, adding that “the final study of the Advisory Committee plays an extremely important role in dealing with the problem of the concentrated accumulation of land, and historical discrimination against the peasantry – particularly women – in the context of accessibility and control over productive resources such as land, water and seeds.”

When it was presented publicly, several relevant aspects of the report were mentioned. In first place, the document has to do with peasants in the so-called “First World” as well as the Third World and poor countries. Thus it has great potential in a globalized World. In second place, it may be the first time that a legal instrument includes the great, contemporary subjects that have to do with food: on the one hand, dealing with the subject of resources – land speculation, and, above all, the concentration and hoarding of ownership is condemned as one of the topics of great concern today; and the topic of water resources is given top priority, based on our knowledge of its present and future importance. Furthermore, emphasis is placed on the question of seeds, and genetically modified seeds especially; and the subject of clean agriculture and healthy foods, subjects at the center of everyday, contemporary discussion. Summarizing, this Project of a Declaration confirms the importance of small-scale, clean agricultural production as it relates to quality, healthy and appropriate food. It conjoins in a single body what are perhaps the oldest peasants’ production systems in the World, with the hopes and needs of many population that not only requires volume, but quality and healthiness of food as well.

The United Nations is an international organization founded in 1945.  It is currently made up of 193 Member States.  The mission and work of the United Nations are guided by the purposes and principles contained in its founding Charter.