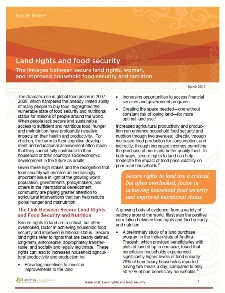 I invite you to read this blog post by Amanda Richardson, Landesa. The post also mentions the issue brief, recently published by Landesa, collating some evidence on the relation between secure land rights, women, and improved household food security and nutrition. Women's land rights are the point of intersection between empowerment and nutrition. The brief concludes: "As governments, the private sector, multilateral institutions, and international development organizations weigh the options for improving food security around the world, they must consider one of the most promising elements for addressing the needs of the world’s hungry and malnourished: secure land rights. Addressing land rights issues—in particular, women’s land rights—in programs and policies designed to address food security and nutrition through agriculture can deepen the impact of those interventions and lead to improved development outcomes."

[From Landesa] While there is no silver bullet to solve global hunger, discussion at the Global Conference of Women in Agriculture (GCWA), held in New Delhi from March 13th to 15th, 2012, pointed to a piece of the solution. In a breakout discussion, participants came to the conclusion that empowering women is the key to improving household access to nutrition.

The question participants left with is how to ensure that women have the power they need to positively influence household nutrition. The Landesa Center for Women’s Land Rights recently released an issue brief that holds part of the answer: secure rights to land.

Despite the fact that women perform over 40% of the world’s agricultural labor, they are often the main losers of the global food crisis. Because of their relative lack of power, women in food-insecure regions experience higher rates of malnutrition than men. In many of these regions, women experience discrimination starting from birth or even earlier until death. Women often lack the ability to make decisions about food consumption, income expenditure, and even which crops to grow. Even in food secure countries, there is often no relationship between women’s calorie-intake and nutrition and, in some countries, over 50% of pregnant women are anemic.

At the GCWA, participants discussed how decisions of intrahousehold dietary allocation and intake are extremely important to reducing malnutrition. The World Food Summit of 1996 defined food security as existing “when all people at all times have physical and economic access to sufficient, safe, nutritious food.” Often food security is perceived as just having access to sufficient calories, but what families need is access to a fully nutritious menu of food options. Research shows that while male farmers tend to focus on cash crops, women focus on growing crops that provide dietary diversity for the family.[v] When women have more power within the household to decide what to grow, the result is not just increased nutrition for women themselves but increased nutrition for the family in general.

Similarly, when women decide what to consume, household nutrition improves. Women with greater influence over household decisions are more likely than men to make decisions that improve the household’s nutrition, as women who have control over household expenditures are more likely to spend that income on purchases that benefit the family. A World Bank report points out that “the income and resources that women control wield disproportionately strong effects on health and nutrition outcomes generally.”In fact, low-income female-headed households often exhibit better nutrition than higher-income male-headed households.