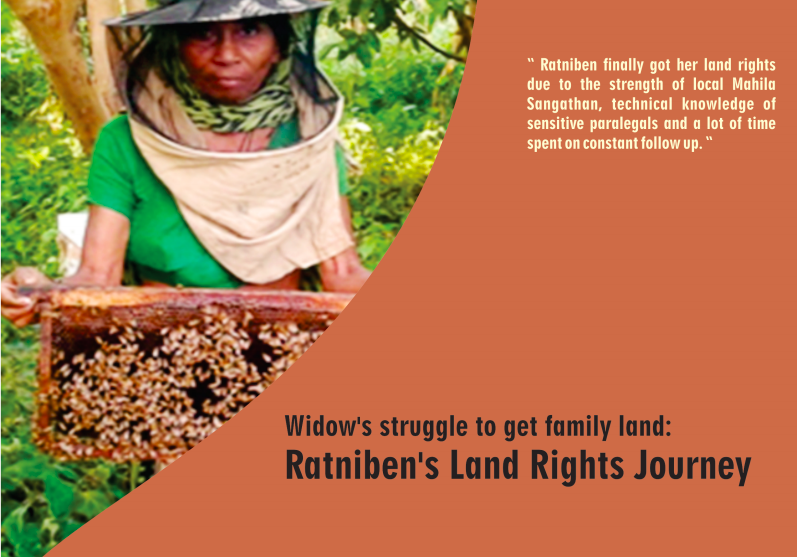 The Vanita Shakti Mahila Sangathan (VSMS) is a community based organisation of more than 2500 women from the Dhanpur block of Dahod, a primarily tribal district in Gujarat. The Sangathan has emerged over the numerous years of grassroots empowerment initiatives by Utthan. With the aim to demonstrate gender just, rights based mechanisms to deal with challenges faced by marginalised women of the area; Utthan has been partnering with VSMS on issues like safety, security, resource rights, access to basic entitlements, sustainable livelihoods etc. The Swabhoomi Kendra (Women’s Land and Resource Rights Centre) is one such institutional mechanism run by VSMS with support from Utthan and the Working Group for Women & Land Ownership, WGWLO, Gujarat. A 2003-04 Study shows that only 11.8% of women in Gujarat owned agricultural land. Recent reports indicate that 89% of landed rural households deny women land rights, despite agriculture and land being an important part of a majority of rural women’s existence. Administrative delays like irregular transfer of inheritance rights at the village level adds to women’s woes.
The strategies to support a single, widowed woman to access her land, control over it and further connect her to improve its productivity and other subsidiary income generation activities is highlighted below.
Ratniben Bhabhor, a 50 year old resident of Bhorva village of Dhanpur, has been a Sangathan member for many years, taking lead at village level on various issues. Six months ago, she lost her husband and was left alone to shoulder all of the livelihood responsibilities. Although she continued tilling her 0.25 acres of land, she knew that she legally had nothing in her name.
Due to her contact with Sangathan and Swabhoomi Kendra paralegal, Bharat, she learnt about widow inheritance rights. She immediately shared her details with Bharat, who guided her through the process of getting her name registered in the inheritance records (varsai). Initially, the Village secretary was not supportive, but the Swabhoomi Kendra helped her file for an application. Thereafter, the Block Development Officer sent a 135 D notice to nine members of her husband’s family seeking their approval and signatures, to include Ratniben’s name in the family inheritance, as per her rights as a widow. As expected, the family members refused – a common way to discourage women to demand rights. After this, Sangathan and Swabhoomi Kendra devised a strategy to collectively visit the family members to counsel them about Ratniben’s rights. The voices of strong women leaders and the technical knowledge of the Swabhoomi Kendra paralegals, finally helped in  getting all the signatures for approval after a lot of hesitation. Finally, Ratniben’s name was registered in the Family inheritance records after a long process, which lasted over three months.
“I am really grateful to my Vanita Sangathan members and Swabhoomi Kendra paralegal, Bharatbhai for their support in getting my name registered in the Varsai. I didn’t know where to go, how to apply, but the Swabhoomi Kendra paralegals guided me through the process.  After my husband’s death, I was totally dependent on my vadi and some agriculture for my livelihood but it was not fetching me adequate returns. Sangathan linked me with a Government Scheme for s hand-tool kit, through which I have gotten the necessary tools for farming. I have applied to avail benefits under the Organic farming scheme. With the support of Utthan, I also took my training on beekeeping and have placed nine honey hives in my fruit orchard. Organic honey has a very good demand in the market, so it will fetch me good money. My life has changed completely and today I feel more empowered and informed about my rights.” -Ratniben
This experience shows that legally, women’s right to resources, especially land, may be equitable, but in actual practice, social, economic and cultural and implementation constraints loom large on the actual realization of these rights, with most of these emanating from a patriarchal bias. Ratniben finally got her right due to the strength of local Mahila Sangathan, technical knowledge of sensitive, land rights’ paralegals and a lot of time spent on constant follow up. In fact, Ratniben’s prior association with Sangathan is what provided her the space to even discuss her challenges and seek support.
Along with WGWLO, Utthan and the Swabhoomi Kendra are also working to advocate with Government and concerned Departments to overcome social and administrative barriers, especially for single women’s land ownership, so that they are not reduced to a state of extreme dependence on their families or those who own and control these resources.
Themes:
Land & Gender
Geographical focus:
India
Related concepts:
gender equity in access to land
women