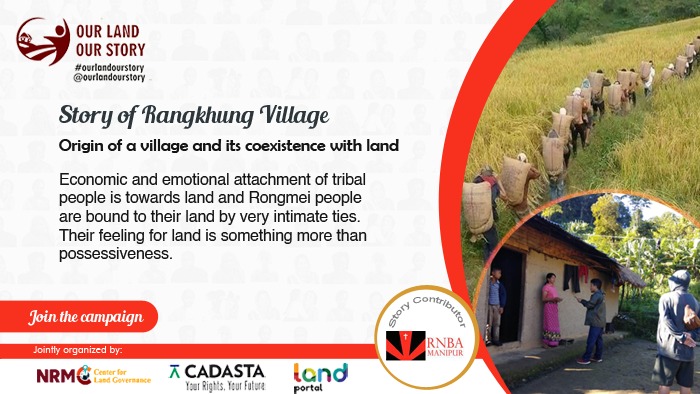 The land has always been an important component of development, especially for people in rural areas. There is no commodity more valuable than land and tribals are no exception. Control over land, however, may also be perceived less in terms of individual land ownership and more in terms of land use, or through what is known as land tenure. Different people in a family or community have different rights to access the land for different purposes and at different times. Such rights were often conveyed through history and not formally documented. Economic and emotional attachment of tribal people is towards land and Rongmei people are bound to their land by very intimate ties. Their feeling for land is something more than possessiveness. It is the setting of adventure, in love, in hunting, and in the war which can never be forgotten. The land is the foundation of a sense of security and freedom from fear.

People of Rangkhung village and their livelihood depends on land as it is required for agriculture and their sustenance. The inability of formal and customary property rights systems to effectively connect in ways that provide for tenure security creates dilemmas which cannot be easily overcome. In the olden days, the people of Zeliangrong and Rangkhung selected and settled down in no-man’s land. People could claim any amount of land, and they could have it. So, whatever land one earmarked, it became his or her land. Demarcation of land was made with ditches, stones, hill ranges, and rivulets. Nampou (village owner) is the founder of the village, is blameless, physically fit, mentally sound, and should be married. Nampou performs all the occasions as such sacrificial of animals and makes appeasement with God, Goddesses, rivers, mountains, and all animals. Nampei (Khullapka) steps in and “Nampou ” leads all the villagers entering the village. Nampou is the founder of the village, and originally the whole land belongs to him. Nampou appoints Khullakpa to help him in the execution of rites at the time of the first settlement and later in the administration of the village. Both Nampou and Khullakpa are hereditary.

The fundamental principle of Zeliangrong’s traditional land tenure system is that it vests all land in the Nampou (village owner). As in all traditional systems, there is no individual ownership of land. Authorities allocate arable land to everyone to cater to his/her family’s subsistence, but he/she has exclusive rights only to crops and the land reverts to communal use after harvesting. Nampou has absolute power in land allocation and land administration. Three types of land ownership systems are prevalent and they are –

These three categories of land ownership in the village/community as clan, private and private land ownership. This big land in size is subdivided into field plots which are held by different households of the concerned clan or individuals (landowners). The mode of production includes jhuming/ shifting cultivation, wet rice cultivation, and terrace cultivation. Among all of these, jhuming/shifting cultivation is most widely practiced mainly due to the topography of the village. Local produce (traditional crops and seasonal crops) is for households’ consumption and not for sale.

Challenges to the customary land tenure system: The traditional land tenure systems are organized around communitarian, clan, and individual notions of ownership. In the clan ownership land, all members of the society have some access to the land resources for carving out their livestock. The defective system of land ownership and land use has brought about many evils such as low production, monoculture practices, non – utilization of local composting, abandoned of local forest with the limited plants/trees, illiteracy among the masses, and most of all, the almost stagnation of the socio-economic development of the regions.

Land mapping: Traditionally, practiced for any activity to be conducted, it involves landowner, village owner and Village Authority in taking a decision for the people. So, they should be aware of the land mapping. Land conflicts on compensation, neighboring village boundaries, customary practices, favoritism, growing inequalities provoked by local politics, church access, control and ownership by few are some of the conflicts seen in the villages.

The mapping of land in the targeted villages has been an incredible and learning experience with much love from the villagers and the youth. Meetings were conducted with the landowners, village authority, women and youth, and the elders, on the mapping process, how to go about, what is to be mapped, and what are the benefits of mapping, etc. were discussed with the members present. Mapping results with the name of the landowner, then the details of the head of the households, area occupied by the individuals in homestead, area of horticulture land cultivated, it also includes information on individuals household details in terms of family details, data on land use pattern, data on women land rights, land tenure security, location details (homestead/ horticulture/ terrace/ jhum/ wetland/ fallow/cultivated etc). During the journey we mapped a homestead of 56 out of total 59 households. Only 1 horticulture area was mapped due to connectivity problems.

Conclusion: It is evident that customary land tenure systems of Rongmei/Rangkhung people are undergoing a tremendous transformation in the sphere of ownership, access control, and mode of operation. This has given way to the development of private land challenging the existing traditional authority. Regarding the traditional land setting for agriculture purposes, the customary tenure system seems to be crumbling slowly due to administration and management problems. And moreover, people are very much attached to traditional beliefs and culture and confine themselves within the jurisdiction of the village which limits the horizon of developmental activities outside the village which could serve as an incentive for them to be out of sight. There is hardly any kind of motivation and urge for socio-economic development under the traditional land-use system practices.