a land dispute is a disagreement over land. 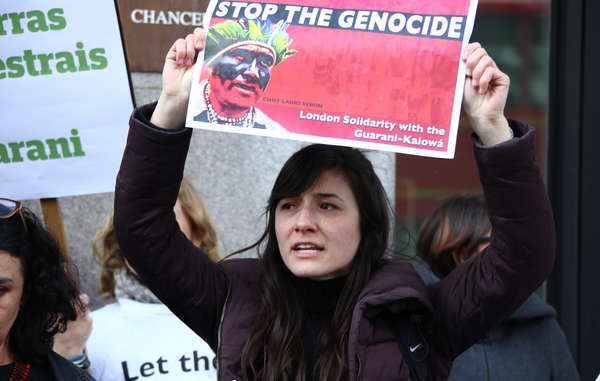 Guatemalan families face a violent eviction as they fled violence in their own homes.

At least 120 campesino families from Guatemala have installed a makeshift camp at the border between the Central American and Mexico as they fear a violent eviction from the army.

Colombia is home to a swathe of rainforest roughly the size of Germany and England combined.

CAQUETA, Colombia, June 9 (Thomson Reuters Foundation) - Seen from the air, muddy rivers snake through rolling forested hills stretching to the horizon in Colombia's southern province of Caqueta that for decades were rebel lairs and an epicentre of the civil war.

On December 22, 2016, President Michel Temer revised a law that specifically regularizes urban and rural land owned by the federal government, notably eliminating requirements for upgrading infrastructure on those lands.

Monrovia - The Civil Society Working Group on Land Rights Reform has launched what appeared to be a last minute fight in persuading the 53rd National Legislature to pass the Land Rights Act before the dawn of the hefty campaign season, which will virtually end the workings of that assembly.

The commission suggested FUNAI, which is run by anthropologists, should be replaced with an agency run by the Brazilian Ministry of Justice.

In countries like Cambodia, Vietnam and Myanmar, tens of thousands face eviction with few tools to fight back

Residents of a village in Hanoi's outskirts took 38 officials and policemen hostage recently in protest against what they claimed was the illegal seizure of their land by a telecommunications firm owned by the military.

How do you deal with bureaucratic inefficiencies and weak capacity, to say nothing of endemic impoverishment, corruption, criminal gangs and staggering inequities that undermine property rights worldwide?

The Indigenous community has demanded that authorities investigate the killing.

Poverty eradication is high on President Joko “Jokowi” Widodo administration’s agenda. On his election campaign trail in Bandung, West Java, on July 3, 2014, he elucidated how he would address the acute poverty among 29 million citizens, 18 million of whom live in rural areas. A priority program he envisaged was provision of land to 4.5 million poor families.

This is a special Earth Day Op-Ed by Michel Forst, the UN special rapporteur on the situation of human rights defenders and Michael Taylor, the Director of the International Land Coalition Secretariat.

Using data collected from over seven million land records, this study examines the extent to which a systematic registration and certification program has contributed to women’s land tenure security. The Land Investment for Transformation (LIFT) program is a six-year DFID-funded program that aims to improve incomes of the rural poor and enhance economic growth in Ethiopia.

“This plot is not for sale” are the six words you will find, marked on a lot of properties and plots of land in Uganda. The words are meant to ward off quack land or property brokers and conmen. Most of the cases handled in courts in Uganda, and Kampala in particular, are fraud-related cases (like selling land while the true owners are away using counterfeit titles) and land transaction fraud (when fake land titles are obtained and sadly some officers in the land registry are involved).

END_OF_DOCUMENT_TOKEN_TO_BE_REPLACED

The African Centre for the Constructive Resolution of Disputes (ACCORD) is a South Africa-based civil society organisation working throughout Africa to bring creative African solutions to the challenges posed by conflict on the continent.

The principles underpinning ACCORD’s operations are the very ideals for which humanity has striven for centuries – peaceful resolution of conflict, human rights, and good governance.
— Nelson Mandela

MISSION: To contribute to improved livelihoods through offering a bridge between communities, stakeholders and policy makers in the promotion of equitable access and sustainable management of land and natural resources.

VISION: To become a centre of excellence in promoting the application of appropriate land policies, laws and management practices by empowering society through innovative and knowledge based advocacy and capacity building in Kenya and the region.

LDGI values of Integrity, Trust and Professionalism influence the way we work every day and everywhere.

swisspeace is a practice-oriented peace research institute. It analyses violent conflicts and develops strategies for their peaceful transformation.

The Toda Peace Institute mission is to promote a nonviolent, sustainable and peaceful world, by pursuing the following four visions:

It is TransConflict’s assertion that the successful transformation of conflict requires a multi-dimensional approach that engages with and aims at transforming the very interests, relationships, discourses and structures that underpin and fuel outbreaks of low- and high-intensity violence.