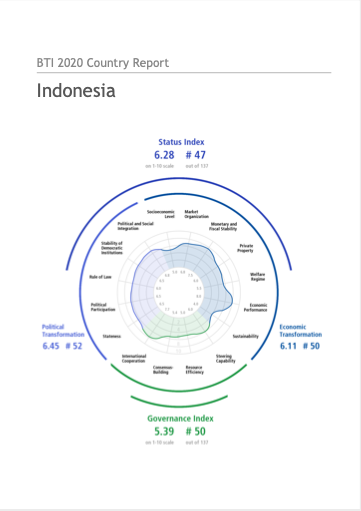 Between 2017 and 2019, the quality of democracy in Indonesia continued to slowly but noticeably decline. While President Jokowi was able to de-escalate the conflict between the government and Islamist groups to some extent, he only managed to do so by integrating some Islamist themes and actors into the government structure. This, in turn, moved Indonesia ideologically and politically to the (religious) right. Religious, social and political minorities were the biggest losers of this shift. The discrimination of LGBTI citizens reached new heights, with local officials leading raids on the LGBTI communities and signing decrees that aimed to remove LGBTI individuals from public life. Ahmadis and Shi’ites continued to experience discrimination, while left-wing activists were increasingly targeted in an intensified anti-communist “red scare” campaign, which the president supported. The government also became increasingly repressive toward its critics, issuing a regulation in 2017 that allowed it to ban social organizations without prior judicial process (a regulation that has been used once). Moreover, internet users attacking Jokowi on social media were imprisoned for spreading misinformation and “hate speech,” while most television stations offered exceedingly positive coverage of the president as their owners supported his re- election campaign.

It is important to note, however, that despite this decline in democratic quality, Indonesia remains an electoral democracy – albeit an increasingly defective one. Unlike other states in the region, it has not crossed the line to electoral authoritarianism, although the risk of this occurring in the medium to long term has increased. Formally, the institutions of democracy remain in place and elections continue to be competitive (although the electorate now has fewer choices than in previous years). Nominal support for democracy as a general concept also remains high among the elite and wider population. While the understanding of what democracy entails differs widely among Indonesians, the fact that democracy is at least rhetorically supported is significant. Finally, the level of communal violence remains moderate to low by international standards and Indonesia’s own experiences of large-scale violence in the 1940s, 1960s and 1990s.

Indonesia’s market economy remained torn between two conflicting economic principles – both of which were advanced in equal measure by political elites, depending on the specific occasion. On the one hand, the significant protectionist streak continued, especially as the 2019 elections neared. Imports were particularly criticized by elites, with presidential candidate Prabowo Subianto pledging to ban imports altogether if elected president, while the government raised import taxes on more than 1,000 goods to reduce the growing current account deficit. Outside of the electoral arena, on the other hand, policymakers remained committed to free trade, especially as the increased protectionism of the U.S. Trump administration turned against Indonesia. Indonesia ratified a number of free trade agreements during the review period and presented itself as a defender of free trade at international summits. Thus, while populist pressure continued to drive Indonesia to advocate some protectionist policies, its overall outlook remained supportive of open markets.