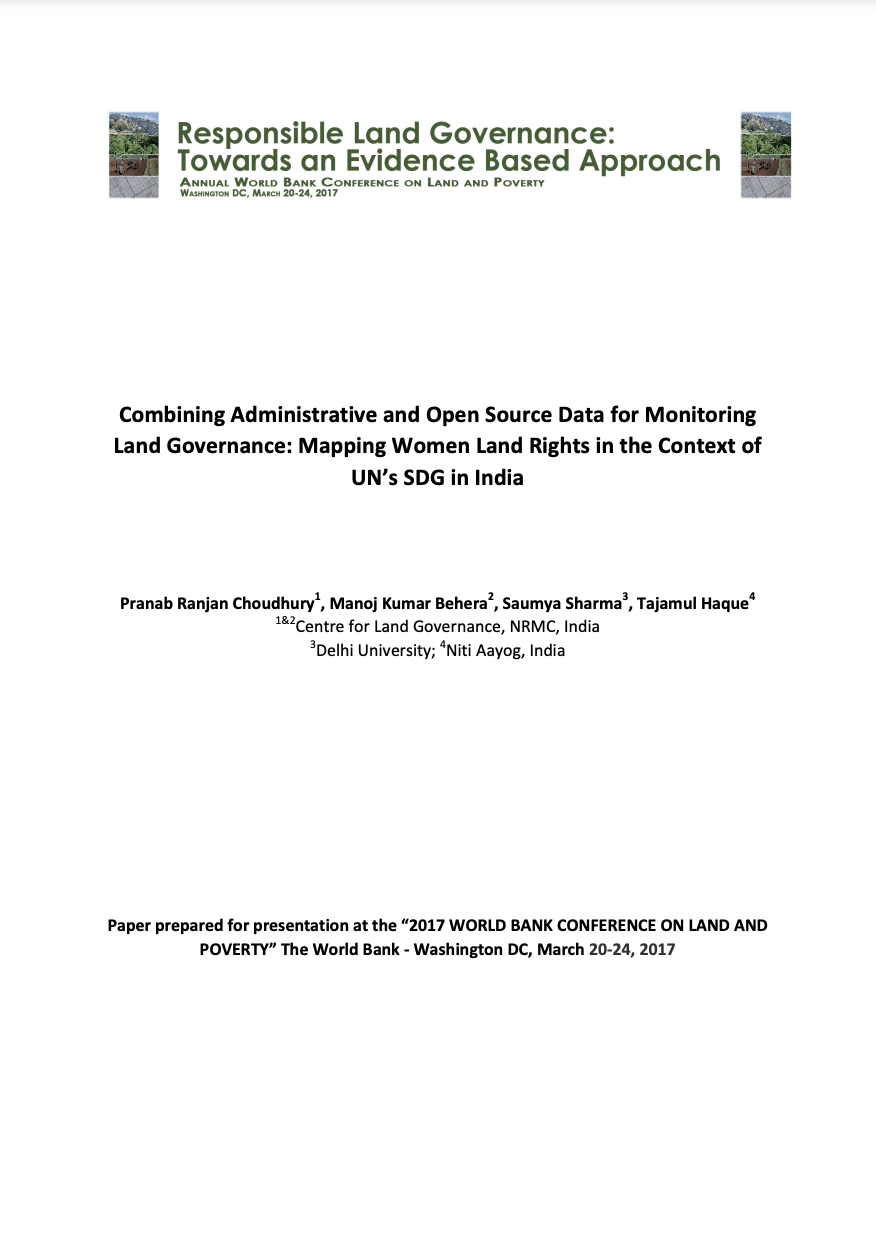 Production, availability and accessibility of reliable data and statistics are of fundamental importance in monitoring and in taking evidence-based decisions for good land governance. The demand for data as evidence is increasingly focused to monitor global and national developmental status and targets. Implementation of intentionally agreed commitments like Sustainable development Goals (SDGs) influence data production and availability, and the development of national statistical capacities (OECD, 2015)1 . At the same time, it also challenges the countries towards production of internationally comparable data to induce fair comparability among nations. United Nations Statistics Division (UNSTAT), the nodal agency for monitoring the SDGs has also highlighted the key role of reliable data sets with adequate disaggregation and granularity in measuring progress around SDG targets. FAO’s Voluntary Guidelines on the Responsible Governance of Tenure (VGGT) of Land, Fisheries and Forests in the Context of National Food Security (the “Guidelines”, FAO, 20122 ) outlines the importance of monitoring in achieving equity over land tenure and access.

With a long and diverse land tenure history, India has launched many progressive reforms around land laws and institutions to make land governance more inclusive and equitable and land information and records more transparent and accessible. However its assessment with respect to global best practices through use of World Bank’s Land Governance Assessment Framework (LGAF) in 6 states conducted in 2014, indicate the need of improvements around different land dimensions including women land rights.

Secure and equitable land rights of women form one of the key indicators (Indicator 5 under Goal 1) of the post-2015 Sustainable Development Goals (SDGs). Gender equity has also been globally recognized as one of the ten core principles for implementation of the FAO’s VGGT.

The Indian Constitution provides equal rights to both men and women. The post-independence era has seen many progressive reforms in land policies with a focus on redistributive justice and gender equity. Land is a state subject in India and many states have gone ahead with exemplary initiatives to ensure gender justice in their land governance frameworks. Movement towards good land governance outcomes is incumbent upon robust and regular monitoring mechanism of women land rights indicators across spatial (viz. administrative boundaries, land being a state subject in India) and temporal scales.

Over years, India has developed institutional capacity and considerably improved data production, accessibility and availability, around different land parameters. Available administrative as well as open source data collected, interpreted and reported by government and non-government agencies at state and national level provide seamless opportunities to monitor and improve land governance. They also enable scope of aligning national level statistics along with international standards and databases and induce comparison. Monitoring and reporting land-indicators is expected to provide a basis to systematically discover and identify good practice that can then be documented and disseminated across states, manage change, and gradually move towards a more performance-based approach to improving land governance in India. Periodic monitoring is also imperative in the context of tracking global targets and goals viz. women land rights in the context of SDGs.

Under Target 5a of SDGs, which addresses the rights of women to economic resources and access to ownership of land, indicators are 1(a) Proportion of total agricultural population with ownership or secure rights over agricultural land, by sex; and 1 (b) share of women among owners or rightsbearers of agricultural land, type of tenure(UNSTAT, 2016)3 . This monitoring require availability of periodic and reliable gender disaggregated data across administrative layers on ‘agricultural land’ (includes land used for farming, livestock and forestry activities) and ‘agricultural population’ (people living out of farming, livestock and forestry, with land rights or without). UNSTAT prescribes the data sources for this indicator to be LSMS-ISA and DHS surveys and National household income and expenditure surveys. FAO’s Gender and Land Rights Database (GLRD) is already disseminating some of these available data.

In the context of gender-disaggregated land data, information in India are available through different databases, collected by different agencies with varied granularity, sampling intensity and periodicity, as survey, census, administrative data and digital online database.

Nation-wide surveys like National Family Health Survey (NFHS) reports gender disaggregated data on property rights including ownership of houses and even non-agricultural land. In India DHS used as NFHS. India Human Development Survey (IHDS) executed in 2005-06 and 2011-12 by a Consortium of American Universities, reports gender-disaggregated intra-holding agricultural land ownership, based on interviews with a nationally representative sample. LSMS was executed only once in 1997- 98.

SDG indicator development and tracking has so far been limited to international agencies and country level practical actions are yet to begin. The availability of such potential data sources, provides India, a strategic advantage to advance the monitoring around the SDG indicator on women’s land rights. The situation can also be leveraged to monitor and report women land rights indicators at state and sub-state level, providing opportunities for comparative appreciation and competition among land-administration units and departments, leading to better governance. However, there has been very limited initiative in this regard. Consideration of ‘land’ as a statesubject and associated complexity and bureaucratic inertia can be attributed as the raison d'être for lack of such efforts. The absence of a formal mechanism in India to monitor progress in land reforms in general, and gender equity in particular, may be one of the causes behind the entrenched inequity in land tenure governance. However, increasing attention on land governance at the state, national and global level, as a tool for sustainable development and efforts to make it better through transparent and evidence-based better land governance, have triggered initiatives in this direction.

In this direction, we have made an attempt to see if tracking and reporting of women land rights indicators in the context of SDG is possible through use of these administrative and open datasets. In this paper we provide a comparative appreciation of all the datasets especially the metadata and methodology along with a SWOT vis-à-vis reporting requirement of SDG indicator. Describing the heterogeneity and complementarity between these datasets, we also explore if individually or in combination, they meet the SDG requirements of reporting sex-disaggregated land indicator. This paper illustrates the spatial distribution and temporal trends around women land rights in India with state-wise and district-wise granularity along with their further segregation across ethnicity and socio-economic categories, using open source agriculture census database.

We also test the robustness of these indicators by comparing them with those reported in published micro-studies, based on primary data at state and sub-state levels as well as with those reported by another paper using IHDS database at aggregate country level. Lastly, we have tried to examine and analyze the link between the spatial and temporal variability of WLR and relevant policies and legalinstitutional frameworks in the concerned states to see if there are correlations for informed policyfeedback and the scope to induce healthy competition among states for gender-equitable land governance.

The World Bank is a vital source of financial and technical assistance to developing countries around the world. We are not a bank in the ordinary sense but a unique partnership to reduce poverty and support development.