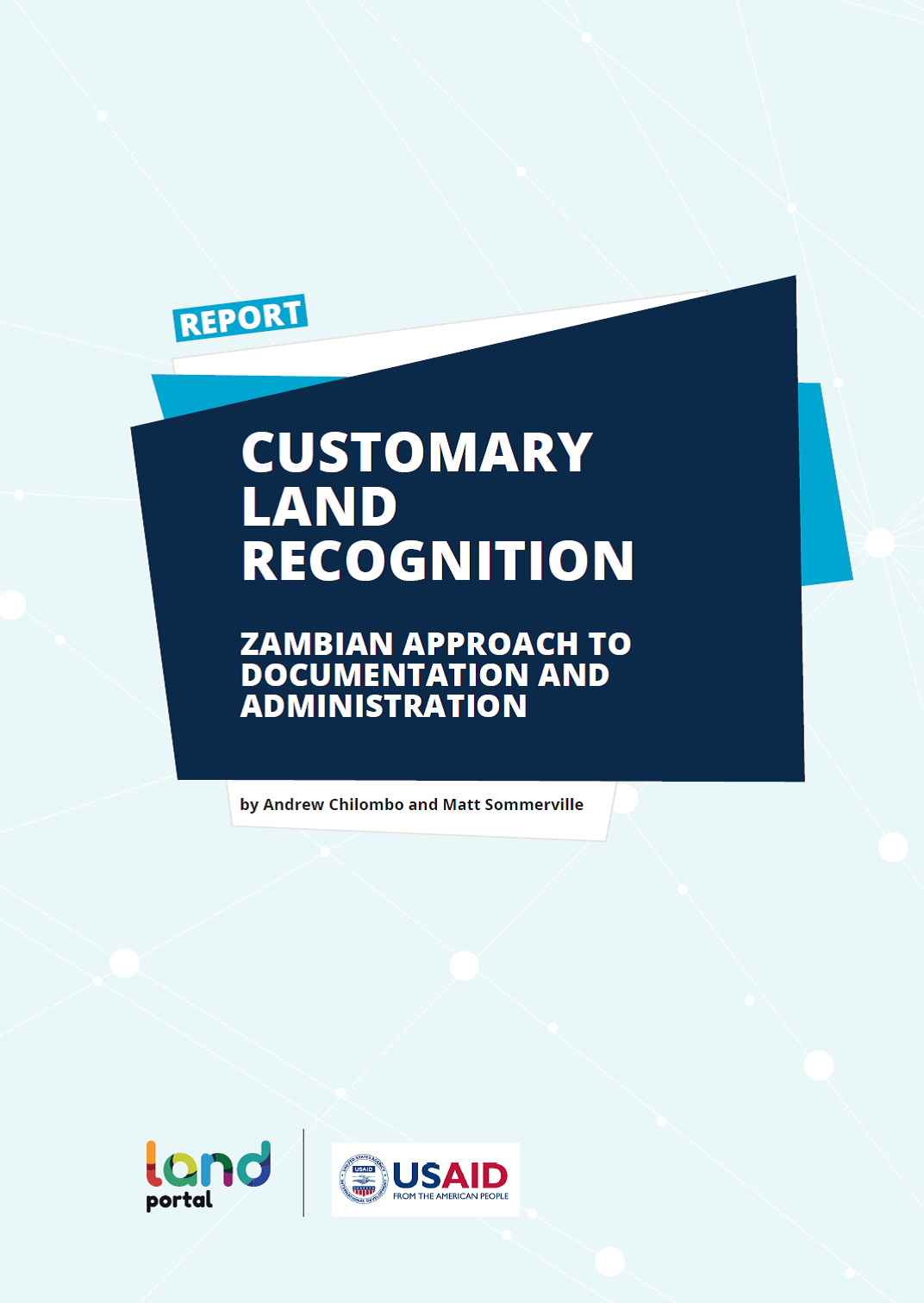 From January 15 to February 6, 2018, the USAID’s Tenure and Global Climate Change Program and Land Portal Foundation co-facilitated a dialogue on experiences of documenting household and community-level customary rights in Zambia. The dialogue brought together the perspectives of government, traditional leaders, practitioners, civil society, and academics to consider how customary land documentation can contribute to national development goals and increased service delivery in rural and peri-urban areas. It considered challenges associated with large-scale documentation and administration processes and the relevance of customary documentation processes to Zambia’s National Land Titling Program and potential future Customary Land Administration Bill.

Customary Land Rights are key to ensuring basic rights of access of resources that underpin basic livelihoods of the most vulnerable are protected. With perhaps over 50% of the world’s land surface de facto managed by indigenous peoples and local communities, there is a need to recognize and subsequently document these rights to land and associated natural resources. Many of these systems have been governed through unwritten, though locally legitimate, customary norms that rely on traditional leaders. With the recognition of customary rights there is also a need to ensure that state and customary institutions are able to communicate, share information, and work toward complementary objectives.

Customary land is often portrayed as rural, forested, and lightly inhabited with limited state engagement, while state land is seen as high value urban and peri-urban planned areas. Yet customary institutions are evolving and are not divorced from market forces, urbanization, or migration pressures. Youth migrate into cities only to return to the safety net of customary land when times are difficult. Households may migrate to lightly populated areas with improved soil fertility or more consistent rains. National and international investors seek land for agriculture, as well as commercial, residential, and industrial developments. In some cases, customary systems are disintegrating, where, for example, large areas of land are being converted to leasehold title and local populations are being displaced. These pressures are particularly strong at the interfaces where customary and statutory land management meet on the peri-urban fringe. In other cases, customary systems are evolving and leaders are protecting the rights of local populations through customary land documentation processes or by promoting fair negotiation between communities and investors. In this context, tools are needed to share information freely and promote improved management of land and natural resources. This is particularly important given that in many contexts, while land may sit with the customary institutions, resources, such as timber, wildlife, and minerals, are unambiguously under the control of the state.

Zambia presents an excellent case study for understanding the opportunities and challenges associated with promoting customary rights recognition. Zambia’s 288 customary chiefs have legally recognized authority over ~70-94% of the country’s 752,000 km2, while government leaseholds on state land are restricted to ~6% of the country at independence, surrounding urban centres and lines of rail, with a further 10-20% of the country that may have been converted to leasehold since 1995. The authority of customary leaders over land is recognized but these leaders have limited tools for land management. Spatial records for both state and customary land allocations are limited, and only a handful of chiefs issue documentation of their land allocations or of customary decisions made in traditional courts. Zambia’s chiefs are relatively non-political, and while some chiefs have been accused of allocating land to investors through non-transparent means, others are seen as advocates for protecting the rights of rural stakeholders. In recent years, the government has launched efforts to document state land through a National Land Titling Program, while at the same time discussing options for promoting the documentation of customary land allocations through a National Land Policy and a subsequent Customary Land Administration Bill. While still under development, these initiatives provide an opportunity to harmonize and build bridges between Zambia’s customary and state land administration systems, which to date are entirely separate from one another.

There are a number of pilots related to land documentation being carried out on both state and customary land in Zambia by the government, the private sector, civil society and donors to test processes and technologies for systematic land documentation across customary and state land. These experiences are creating an evidence base from which to develop a national system.
An equally important, though less discussed, element of customary land management in Zambia is the devolution of rights to natural resources found on customary land, particularly wildlife and forests. At present, though communities may have customary rights to land, they do not have rights to commercialize wildlife or timber, limiting their opportunities for diversified rural livelihoods built on natural resources. Yet there are emerging mechanisms such as community forestry, community game ranching, and community titles that may strengthen local institutions and their legal authority to manage resources.

The discussion contributed to Zambia’s customary rights recognition processes by increasing internal understanding of the conducive policy and social framework for rights documentation, and by increasing global awareness of Zambia’s opportunities for leadership in this area.