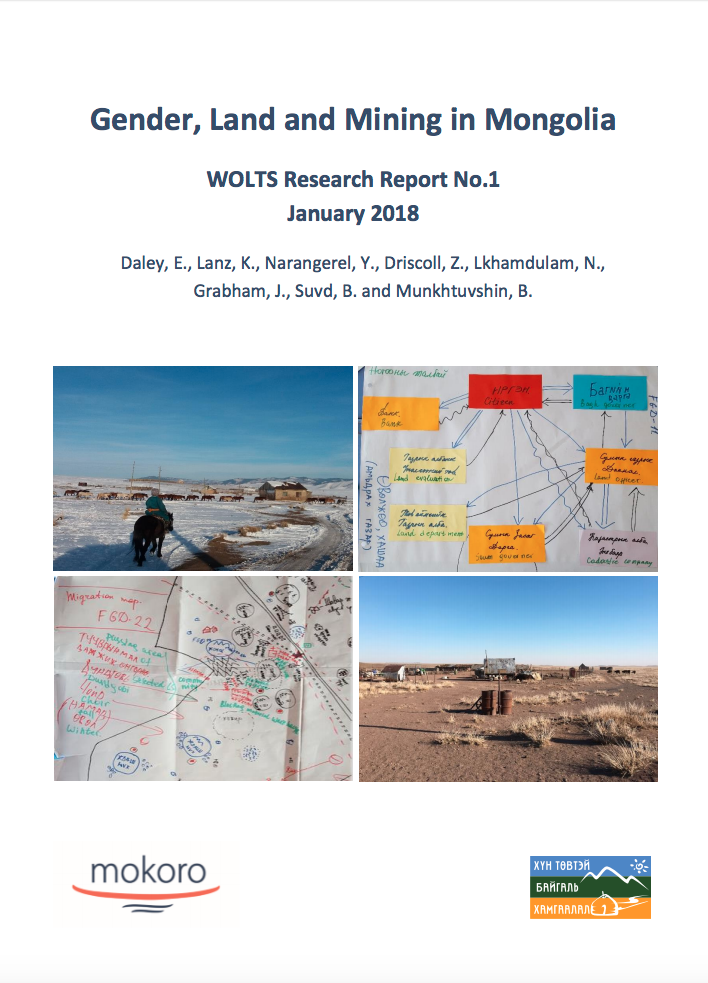 Mokoro’s practical and action-oriented long-term strategic research project, the Women’s Land Tenure Security Project (WOLTS), is piloting its methodology through a ‘Study on the threats to women’s land tenure security in Mongolia and Tanzania’. Working with our NGO/CSO partners – People Centered Conservation (PCC) in Mongolia and HakiMadini in Tanzania – we have been investigating the state of women’s land tenure security in pastoral areas affected by mining investments, through both participatory qualitative and quantitative research, to identify the main threats to the land rights of women and vulnerable groups. The WOLTS project’s aim is to assess possible means to improve gender equity in land tenure governance and secure the land rights of vulnerable people within communities, as well as to support communities to withstand threats to their land and natural resources.

To date there have been limited studies combining analysis of gender, land, pastoralism and mining – whether globally or specific to either Mongolia or Tanzania. At the same time, the topic of land tenure security is now higher up the international development policy agenda than it has ever been. Widespread attention focuses on threats to community land rights and the livelihoods and food security of rural people worldwide, with specific concerns arising over both internal and external threats to people’s land tenure security that are linked to poor land governance, unclear rights and large-scale land acquisitions (LSLAs).

Research and literature on land tenure security and LSLAs has tended to be biased towards African countries, agricultural investments and impacts on small-scale farming – even though land tenure security is equally affected in other regions and livelihood systems, such as pastoral, forest- or fisheries-based systems, and by non-agricultural investments, such as those in mining/extractives, forestry/timber and tourism. Likewise, even though gender issues are now less peripheral in the research and literature on LSLAs than they have been, the internal socio-political, class and gendered dynamics of land tenure security within communities and the gender and social equity impacts of externally-driven LSLAs are still not yet fully understood. This is particularly the case for pastoralist communities in mineral-rich areas. Furthermore, a core tension remains within debates on community land rights and land tenure security over the subject of women’s rights. This tension arises most profoundly on the question of how best to protect vulnerable people’s land rights within communities from both internal and external threats – including the internal gender-based inequalities and discrimination that are everywhere rooted in social and cultural norms.

By focusing on the intersection of gender and land relations in different pastoralist and mining contexts, WOLTS aims to contribute to these knowledge gaps in a practical and action-oriented way. The present report shares our findings from Mongolia – a country that is well-known for both its longstanding traditions of nomadic herding and its mining boom over the past two decades. The report sets out the findings of our research in Mongolia during the first two years of the WOLTS pilot study. It begins by setting out the national context, based on information gathered during interviews with key stakeholders in Mongolia and during background research and literature review. (See Annex 4 for details of interviews conducted and Annex 5 for secondary sources consulted.) This is followed by a brief introduction to the two community studies that make up the core of the report. The findings analysed in the community studies derive from our fieldwork between April and November 2016, including initial field visits, a baseline survey and a participatory fieldwork phase, and they were validated during follow-up visits to both communities between June and August 2017 and a multi-stakeholder workshop in October 2017. (See Annex 1, Annex 2 and Annex 3 for details of the study methodology.) The report concludes with some comparative conclusions from our two study soums that shed light on the intersection of gender, land, pastoralism and mining in Mongolia today.

We are an international development consultancy working to improve the wellbeing and opportunities of poor and vulnerable people, by supporting sustainable economic and social development.