Santiago Maldonado was last seen alive in public in Patagonia on August 1 at a protest for the land rights of the Mapuche, a group of indigenous peoples from Chile and Argentina. Various witnesses recount seeing him being detained by military police and loaded into a van during a raid by state authorities, but there is no official record of his detention, and no information was provided to his family.

On October 17, after 81 days “missing”, Maldonado’s body was found abandoned in a river near the Mapuche settlement. While government officials claim that he “drowned”, with some even blaming Mapuche activists for his death, human rights groups insist that the area had already been searched thoroughly and that there is no way the current could have carried the body to where it was found. In other words, they argue that the government planted the body.

For the three months since he went missing, there have been widespread and large-scale protests across Argentina asking the simple question: “Where is Santiago Maldonado?”. Led not only by Maldonado’s family, but also national and international human rights organisations, the protests focused on on the disappearance, the government’s delay in investigating, and the alleged cover-up. Some involved are accusing state police of infiltrating their protests.

This affair is about much more than Maldonado’s mysterious death in itself. The raid during which Maldonado disappeared was one of many organised against Mapuche communities in southern Argentina – and yet another flashpoint in a long struggle for indigenous rights.

Benetton and the Mapuche

At the time of his disappearance, Maldonado, a backpacker, artisan and tattoo artist, was at the Pu Lof en Resistencia Departamento Cushamen (the Lof Cushamen), a community in the Patagonian province of Chubut, where he was supporting the Mapuche in their struggle. In particular, he was present to join struggles for the freedom of the political prisoner Facundo Jones Huala, who is currently being held by the Argentine state.

The Pu Lof community was formed by a few Mapuche families in 2015. Their stated aim was to “recuperate” a small proportion of their ancestral land, which was first expropriated in the 1880s in an act central to the creation of Argentina itself. Since 1991, the land has been owned by the Italian clothing company Benetton. The company’s ownership of these 900,000 hectares of land make it Argentina’s largest private landowner, providing it with great profits from sheep farming, mining and forestry. 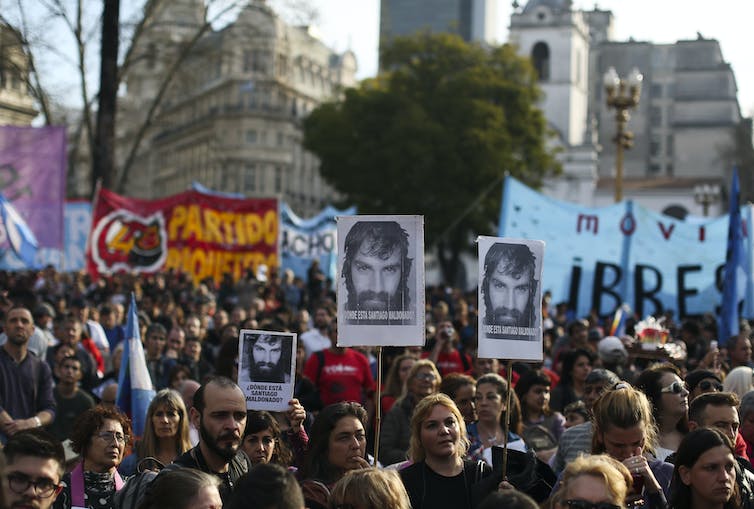 In recent years, state repression of indigenous land rights movements has become more regular and more violent. It is often justified with spurious legal claims, such as the need to reclaim an unused narrow-gauge railway line.

This is similar to the behaviour of various Latin American governments, many of whom put resource extraction and financial exploitation at the centre of the economy. This in turn dramatically increases the political power of multinational corporations – states come to rely on their capital and enforce resource-seeking land-grabs with various tactics, including violence.

This tendency stretches well beyond Latin America. Indigenous groups the world over are struggling to protect and reclaim their land and to organise it according to values different to international capital. The saga of Native American resistance to a proposed pipeline at Standing Rock in North Dakota is but one example.

Closer to home, this “disappearance” carries an eerie echo of Argentina’s years of military dictatorship between 1976 and 1983, when the junta disappeared 30,000 people. The disappearance, protests, and contested discovery of Maldonado, highlight an increase in political repression under Mauricio Macri’s government, as shown by the treatment of social movements and indigenous groups – such as the continued detention of Milagro Sala. This re-emergence of state violence reminds us that the struggles of groups such as Madres de la Plaza de Mayo (Mothers of the Plaza de Mayo), who campaign for justice for the disappeared and their families, are not historic, but contemporary.

Despite these extremely troubling events, coverage of the disappearance outside of Argentina was at first relatively limited. That changed somewhat when the row over the disappearance crept into the campaign for the mid-term elections, held on October 20. But even then, Macri’s administration initially tried to shift the blame onto the Mapuche themselves, further illustrating its disregard for indigenous groups.

Some of the coverage of the case hardly helped. Major outlets drew false equivalencies between the Maldonado disappearance and the curious case of Alberto Nisman, a federal prosecutor who died in mysterious circumstances in 2015. Beneath the most superficial level, the two cases are very different – equating them strips the Maldonado “mystery” of its all-important context and ignores the power relations at play.

With the mid-term elections done and Macri’s government basking in triumph, it is imperative that Santiago Maldonado’s disappearance and death does not become depoliticised. This story is part of both the Argentine history of disappearance and the continued global marginalisation of indigenous groups.

As the right-wing Macri government consolidates its power and its links to multinational corporations, the politics of indigenous groups and social movements must not be allowed to fall off the agenda.