Main photo: Celia Xakriaba, an indigenous educator and activist of the Xakriaba people of Brazil, with a portrait of Paulo Paulino Guajajara, who was killed in an ambush by illegal loggers in 2019. Photograph: Olivier Hoslet/EPA

A record number of people were killed last year for defending their land and environment, according to research that highlights the routine murder of activists who oppose extractive industries driving the climate crisis and the destruction of nature.

More than four defenders were killed every week in 2019, according to an annual death toll compiled by the independent watchdog Global Witness, amid growing evidence of opportunistic killings during the Covid-19 lockdown in which activists were left as “sitting ducks” in their own homes.

Colombia and the Philippines accounted for half of the 212 people killed last year, a surge of nearly 30% from 164 deaths in 2018 and 11 more than the previous record in 2017. Most killings went unpunished and the true number of deaths is likely to be much higher as many go undocumented.

The mining industry was linked to the most land and environmental defender deaths in 2019, according to the report, followed by agriculture, logging and criminal gangs. Indigenous communities around the world continue to face disproportionate risks of violence, making up 40% of murdered defenders last year.

Alongside the 2019 figures, campaigners expressed concerns that slow or deliberate inaction from governments and corporations to protect vulnerable communities from Covid-19 has led to higher infection rates, raising fears of opportunistic attacks on defenders. 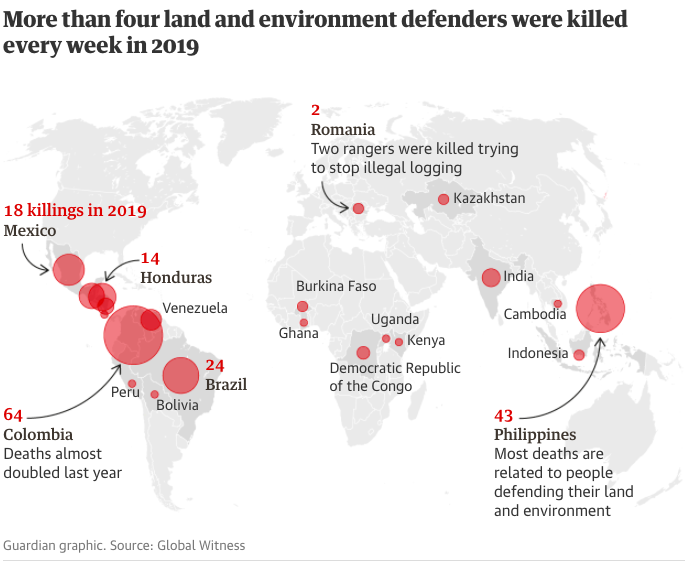 In March, the Colombian indigenous leaders Omar and Ernesto Guasiruma were killed while isolating at home after meeting a local mayor who had tested positive for Covid-19. Two of the victims’ relatives were seriously wounded in the attack.

In Brazil, where 24 people were killed in 2019, indigenous communities have warned they “are facing extinction” in the pandemic, with leaders accusing the far-right president Jair Bolsonaro of “taking advantage” of Covid-19 to eliminate indigenous people.

In Colombia, where deaths more than doubled last year to 64, the most Global Witness has ever recorded in one country, murders of community and social leaders have surged dramatically.

Shifts in local power dynamics after the 2016 peace agreement between the Colombian government and the Farc have been cited as a driver of the rising violence, especially in rural areas, where criminal gangs are repositioning themselves in formerly guerrilla-held regions.

With many paramilitary and criminal groups still highly invested in the drugs trade, the NGO recorded 14 deaths in Colombia linked to a crop substitution programme that offers coca farmers grants to switch to alternatives like cacao and coffee in 2019.

“Agribusiness and oil, gas and mining have been consistently the biggest drivers of attacks against land and environmental defenders – and they are also the industries pushing us further into runaway climate change through deforestation and increasing carbon emissions,” said Rachel Cox, a campaigner at Global Witness.

“Many of the world’s worst environmental and human rights abuses are driven by the exploitation of natural resources and corruption in the global political and economic system. Land and environmental defenders are the people who take a stand against this.

“If we really want to make plans for a green recovery that puts the safety, health and wellbeing of people at its heart, we must tackle the root causes of attacks on defenders, and follow their lead in protecting the environment and halting climate breakdown.”

Killings continued to rise in the Philippines, which was the most deadly country in the world for people defending their land and environment in 2018, with 48 deaths recorded last year.

They include that of the indigenous leader Datu Kaylo Bontolan, who was killed on 7 April 2019 during a military aerial bombardment in Northern Mindanao, which is at the heart of president Rodrigo Duterte’s plans to convert huge areas of land into industrial plantations.

The Manobo leader had opposed commercial logging and mining in his ancestral heartlands and had returned to the mountainous region to document violence against his community.

While Europe remained the least affected continent, two rangers were killed in Romania in 2019 while working to stop illegal logging in some of the continent’s most pristine forests, numbering among the 19 state and park officials killed worldwide.

More than two-thirds of the verified killings took place in Latin America in 2019, including 33 in the Amazon region alone. Deaths rose from four in 2018 to 14 in 2019 in Honduras, making the Central American country the most dangerous country in the world per capita for land and environmental defenders, according to the report.

The NGO said limited monitoring capabilities in Africa meant deaths there were thought to be underreported, with seven verified murders of environmental activists in the continent in 2019.

Four defenders have been killed every week since the Paris Agreement was signed in December 2015, according to Global Witness, with many more silenced by the threat of attack, intimidation and sexual violence.