The Challenge of Protecting Community Land Rights: An Investigation into Community Responses to Requests for Land and Resources  | Land Portal
Skip to main content 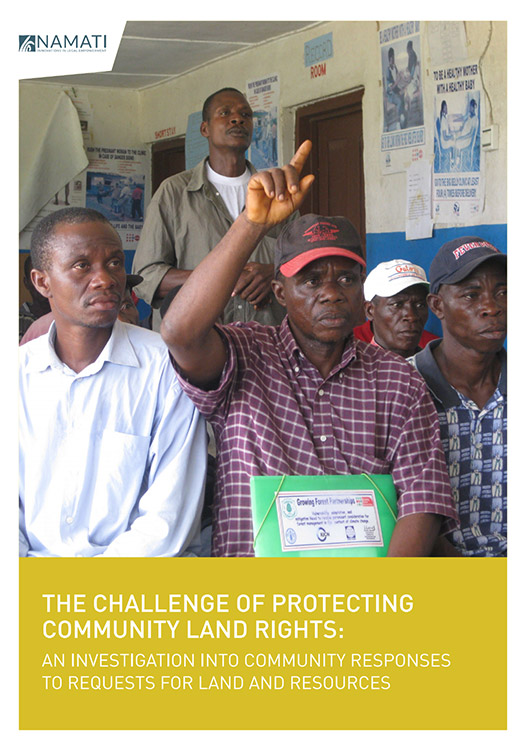 From 2009 until 2015, Namati and its partners Centro Terra Viva (CTV) in Mozambique, Land and Equity Movement in Uganda (LEMU), and Sustainable Development Institute (SDI) in Liberia supported more than 100 communities to document and protect their customary land rights. In late 2017, Namati evaluated the impacts the process had on communities’ responses to outsiders seeking community lands and natural resources.

The study tested the following assumption: “Once communities know their land rights and have documented their land claims, they will act in an empowered way when approached by government officials and/or investors seeking land, and will have improved tenure security outcomes.”

Of the 61 communities assessed, 46% had been approached by outside actors seeking community lands and natural resources since completing their land protection efforts. Overall, the stories recounted by the communities clearly show how, on their own, community land protection initiatives, as they were implemented in Uganda, Liberia, and Mozambique, did not adequately balance the significant power asymmetries inherent in interactions between rural communities and government officials, whether they are coming on their own behalf or accompanying potential investors.

These outcomes were prevalent despite community members’ ability to clearly articulate their legal rights in such situations—and were the same independent of whether or not the community had a formal government-issued document for its land rights (Mozambique); legal private ownership under law (Uganda); or fought the land grab, seeking external support from NGOs and political representatives (Liberia).

The stories described in this report illustrate broad-based corruption that allows land to be claimed by powerful elites and government institutions with little regard for required legal procedures.

By showcasing the rampant injustices the study communities faced, this report aims to shed light on how to more effectively address such imbalances of power and strengthen global efforts to protect community land rights.

For an 8-page executive summary of the study’s key findings and recommendations, click here.