When Nuri Jaramillo won three million pesos in the lottery she wondered if it was a bad omen. She chose the number 666 for the winning lottery ticket. She used the winnings to buy clothing for her three children and then invested in the small store that she set up inside her home in the town of Cáceres, located in north-central Colombia. Through a barred window, she served customers groceries, snacks, and sodas.

“My store was full. It was proof that I had worked hard and achieved something for me and my family,” says Nuri.

The dream ended in 2018 when men from the Clan del Golfo—an ex-paramilitary group involved in drug trafficking—killed a neighbor and then drove her family away, fearing she could have witnessed the massacre. In a matter of minutes, Nuri and her children escaped, still barefoot, and then walked over 50 kilometers to the neighboring municipality of El Bagre.

The men invaded Nuri’s house and ransacked the store. The groceries kept them fed for months. Some of the men moved into her home. On the shutter of the window where she sold candies to neighborhood children, the men wrote ‘you cannot live here’ in stark, white spray paint. The words kept Nuri and her family away for three years and reminded the rest of the neighborhood that in a place like Cáceres owning a home can be unpredictable, and above all, that everything can disappear in a moment’s notice. 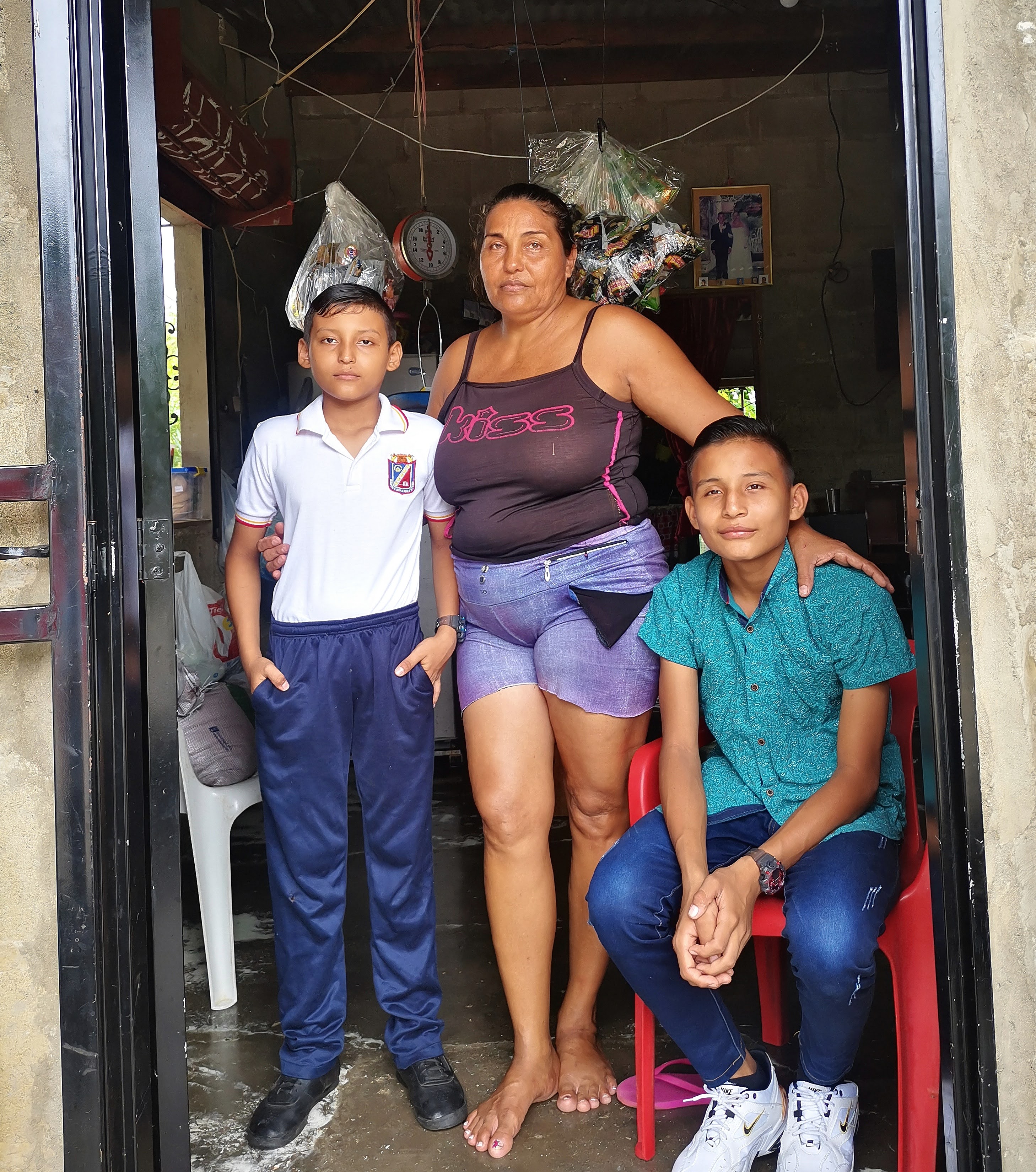 The urban center of Cáceres is home to more than 5,000 people, but the majority has no registered land title for their property. In fact, most of the land in town is said to belong to either the local dioceses of the Catholic Church or to an ex-mayor. The latter bought 415 hectares in 2005 and a decade later was investigated for fraud. His property Candilejas is like a mysterious celebrity, i.e. most neighbors know of the property, but none are sure exactly where it lies.

The problem is that Cáceres has no reliable cadaster—or plot map. The cadaster used by the Colombian Government has not been updated for 17 years. As a result, much of the truth about land ownership is based on word of mouth and on knowledge passed from parents to children or from door to door. Sometimes a property’s perimeter is nothing more than an educated guess.

“There could be one thousand landowners living in Candilejas,” explains Wilmer Molina, the social worker employed by the Caceres Municipal Land Office. “This town has no working property map. Why? Because that is usually the most costly part of the process. Land surveys require a budget, and none of the municipalities in Bajo Cauca can afford it.” 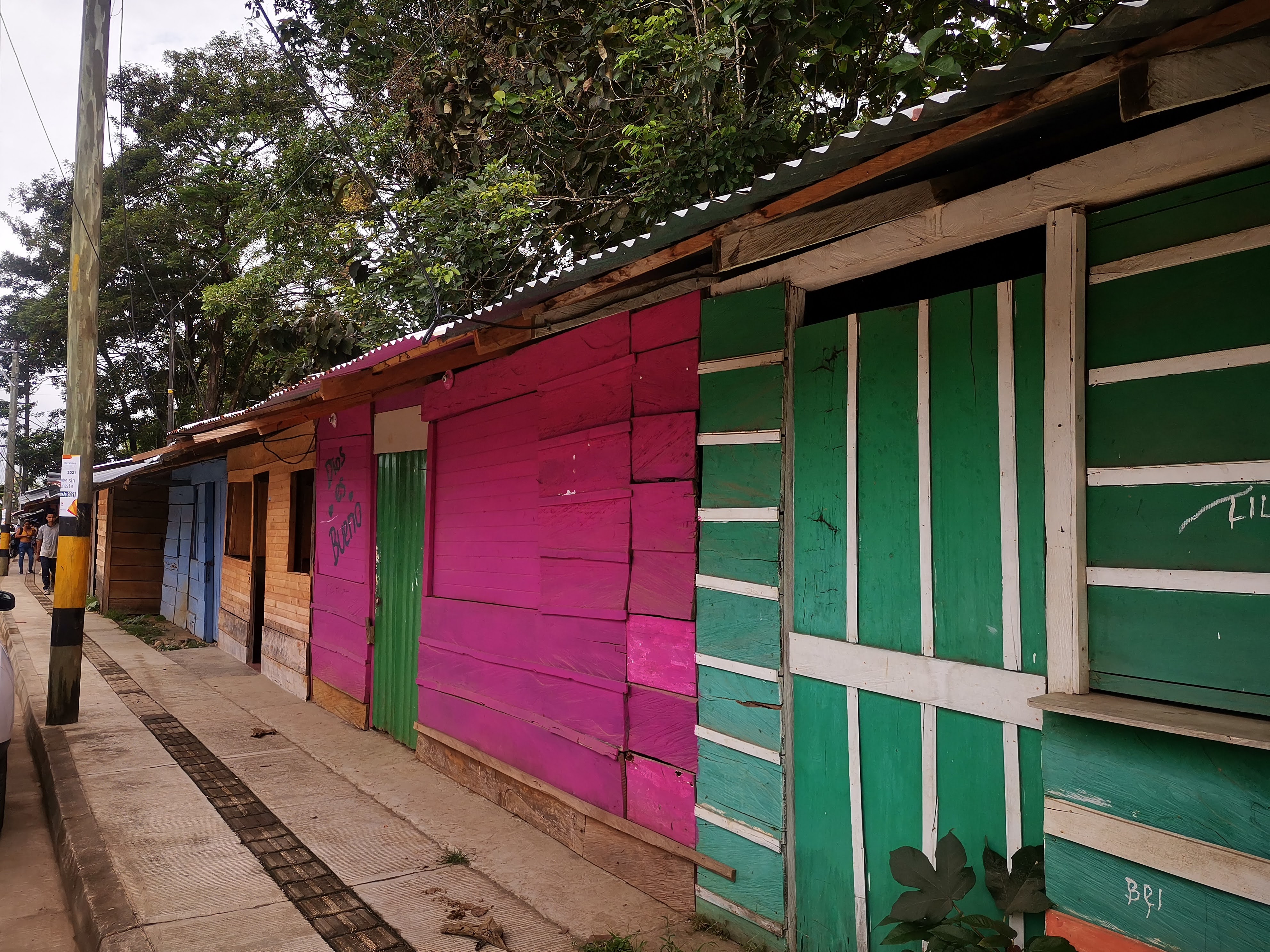 A History of Violence

Bajo Cauca is the name of the sub-region located in the upper reaches of the department of Antioquia and includes the municipalities Cáceres, Tarazá, El Bagre, Zaragoza, Nechi, and the sub-region’s main city, Caucasia. Since the early 90s, Bajo Cauca has been a caricature of Colombia’s conflict: leftist guerrillas, paramilitaries, and narco-trafficking groups have all roamed and controlled the green hills and valleys surrounding the Cauca River. The groups, who sometimes work together, also fight violent turf wars. They rely on artisanal gold mining and drug trafficking for financing and use violence and displacement as tools of control.

In Bajo Cauca, times of peace come in small increments.

Under these conditions, the last thirty years have seen large portions of Cáceres territory bought and sold, and ultimately ending up in the hands of fewer and fewer people. Underlying the accumulation of land is violence, which has displaced the majority of Caceres’ population, some more than once. Just in the last three years, over 1,500 families have fled their homes.

“In Cáceres, this culture of informal land ownership is pervasive. First the people find a piece of land to live on, and then they see how to own it.”

Putting it on the Map

The Caceres Municipal Land Office is slowly trying to change this situation. Embedded in the municipal administration, the land office is the most effective tool for clearing up historical confusion around land ownership in the urban areas of Cáceres. With support from the mayor and financial support from USAID, social worker Wilmer Molina and the land office’s legal expert, Carlos Ávila, are following through on a strategy that expects to formalize hundreds of urban properties, not to mention dozens of public properties like schools, health clinics, and parks.

Molina and Ávila are the boots-on-the-ground team and play a critical role in facilitating the work of Colombia’s land administration agencies. Over the last year, the duo has studied a universe of more than 3,300 parcels subject to titling. By analyzing historical data, they determined that approximately one of every three properties is actually owned by the ex-mayor. After filtering the Candilejas properties, they analyzed the remaining properties according to whether they have been registered and whether the owners were still living on the property or in the area. The analysis yielded some 300 properties with the conditions to be formalized.

From the heart of Cáceres, the Municipal Land Office is steering the ship: preparing the paperwork and triangulating formalization procedures with notaries, judges, the IGAC, and finally, with the National Land Agency (ANT) and Colombia’s national land registry (SNR). In Colombia’s complicated land formalization processes, each of these stakeholders is instrumental in legalizing and formalizing urban properties. 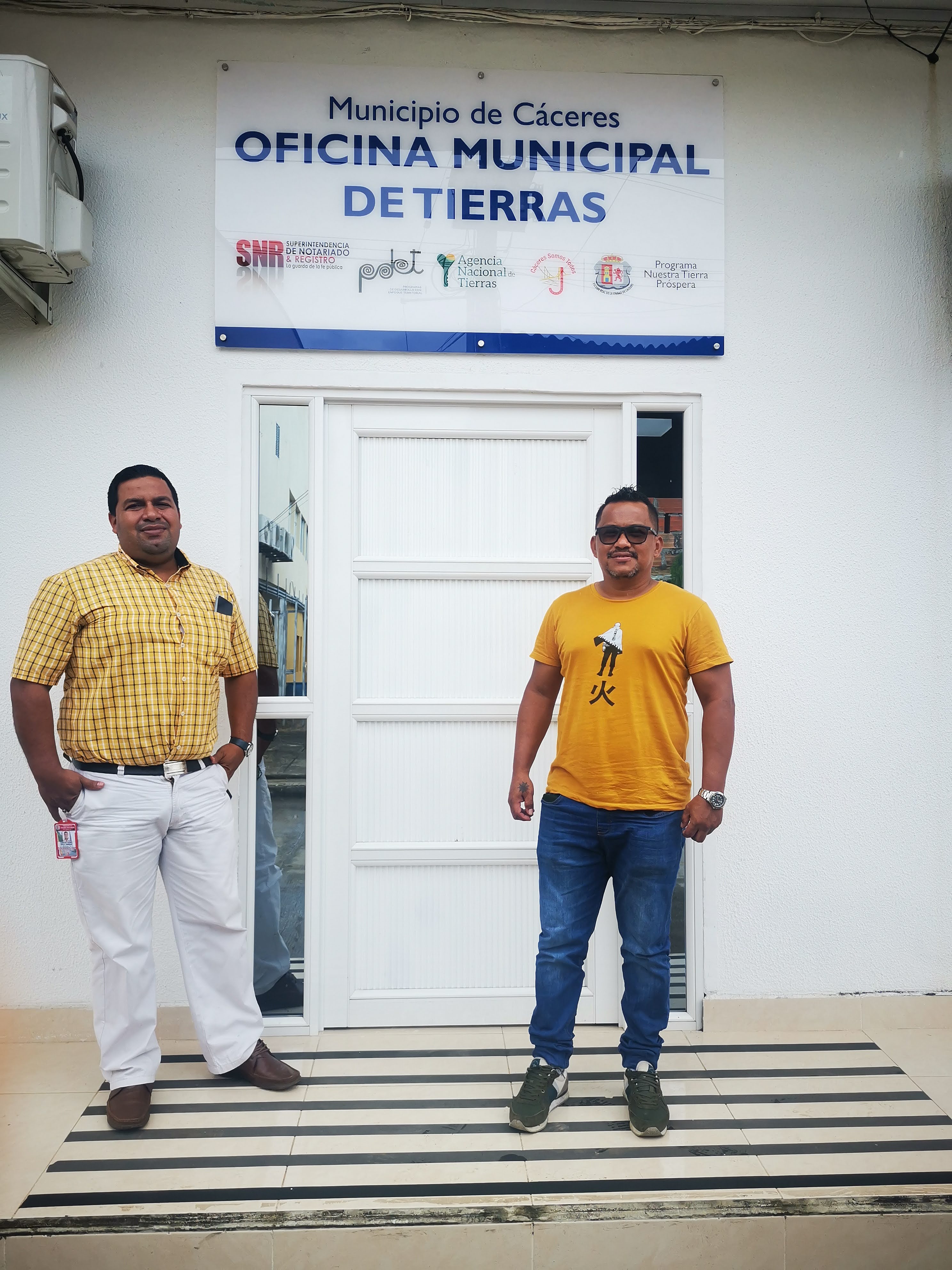 More important for neighbors like Nuri Jaramillo, Molina and Ávila are the face of land administration. Most of the people living in the region of Bajo Cauca lack either the means to travel to the nearest land registry office or to Bogotá or lack the basic understanding of how land is titled under Colombia’s arcane laws. It was Wilmer Molina who brought land administration services to Nuri Jaramillo, first by way of the property analyses and then through the office’s social outreach strategy.

Through visits, Molina learned that years before that frightening night when she and her family were chased away from their home, Nuri Jaramillo had tried to formalize her property. When she purchased the property in 1993, she immediately went and legalized it with Colombia’s cadaster management authority, known as the IGAC. However, when she tried to process her land title, it was too costly and too difficult to muster. 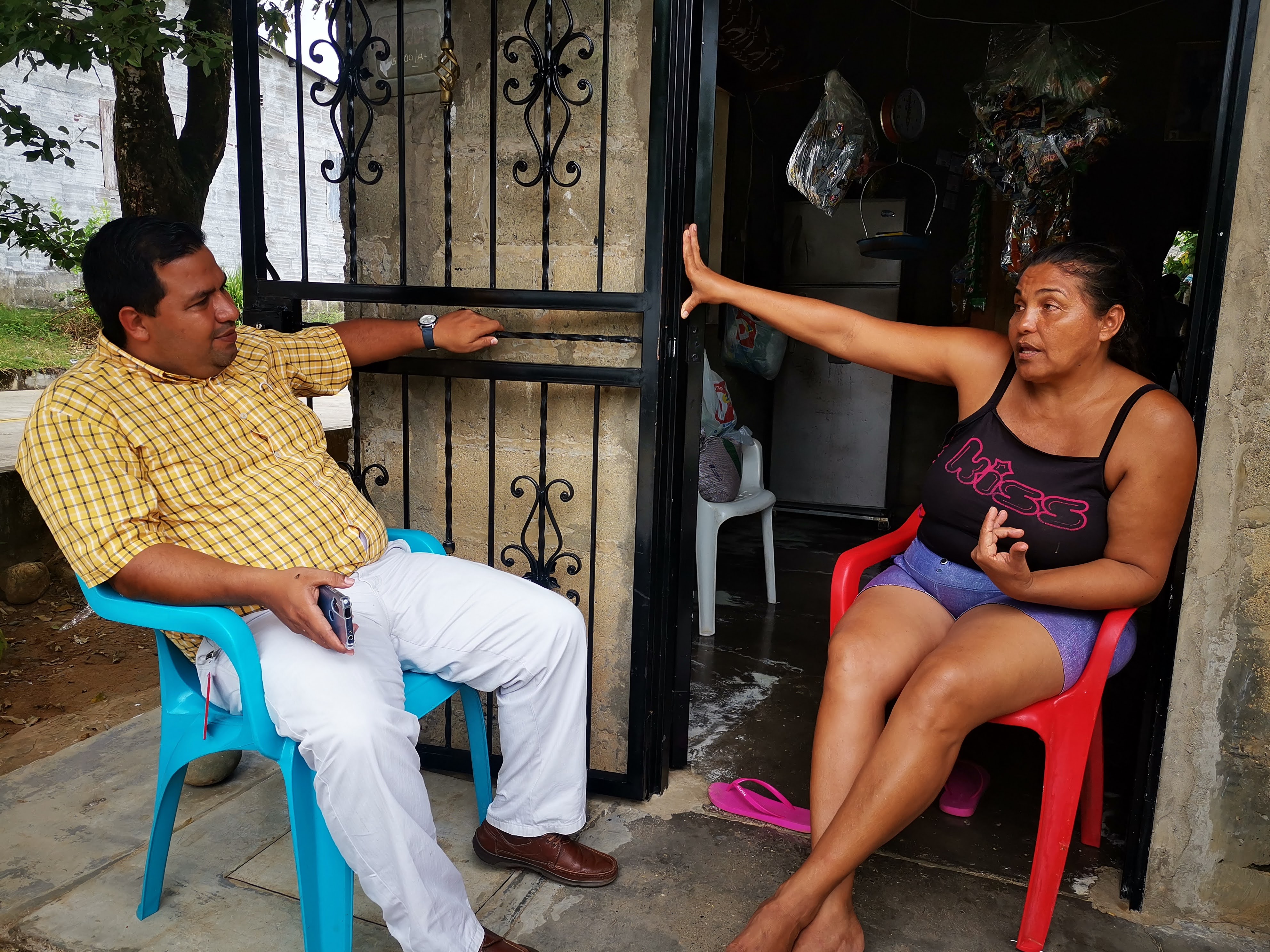 “For 28 years, I tried to get a land title and I still had nothing to show. And then last year, when the land office came, we finally confirmed that this is not part of Candilejas,” explains Jaramillo proudly.

Nuri Jaramillo returned to her home in early 2021. Most of the furniture had been taken, and the entryway door jamb was destroyed. As she cautiously settled back into her home, the Municipal Land Office began formalizing the property. In July 2021, she was one of the first 40 residents of Cáceres to receive a land title, free of cost, through the local government.

In March 2022, the mayor and the Cáceres Land Office delivered another 54 land titles. Meanwhile, they continue to study the histories of properties in Cáceres. Molina and Ávila are quickly discovering that each property has its own story, which must be studied and legally documented.

“Some of these families have waited 40 years to have a land title that accredits them as registered property owners, and we have achieved that thanks to the Municipal Land Office. A land title is a fundamental aspect of guaranteeing the patrimony of home ownership.”

Despite having her land title, Nuri Jaramillo still has not spent a night in her home. The trauma of being attacked and displaced has affected her entire family. Every night, she gathers her children and walks down the street to sleep at a friend’s house. She has restocked her store and painted the window’s shutter with a couple words of her own: open for business.

“Maybe I still can’t sleep here, but now I have my land title and to the men who told me that I can’t live here, I say ‘yes, I can live here’, because this is my house.”