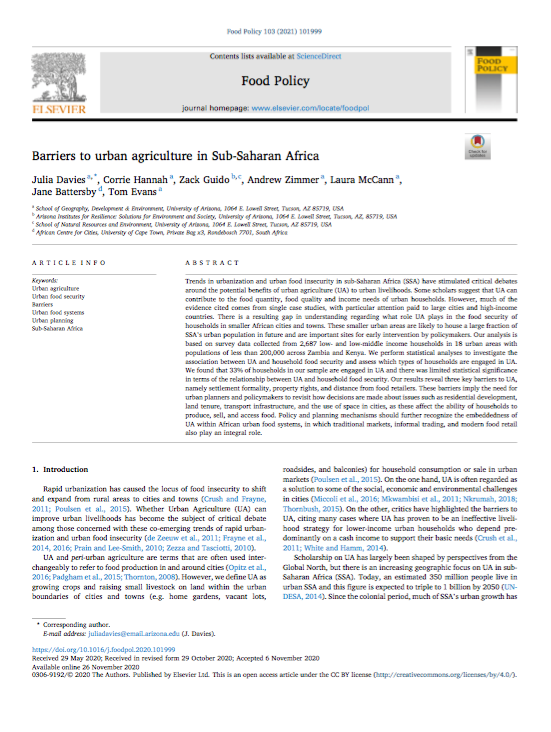 Trends in urbanization and urban food insecurity in sub-Saharan Africa (SSA) have stimulated critical debates around the potential benefits of urban agriculture (UA) to urban livelihoods. Some scholars suggest that UA can contribute to the food quantity, food quality and income needs of urban households. However, much of the evidence cited comes from single case studies, with particular attention paid to large cities and high-income countries. There is a resulting gap in understanding regarding what role UA plays in the food security of households in smaller African cities and towns. These smaller urban areas are likely to house a large fraction of SSA’s urban population in future and are important sites for early intervention by policymakers.

Our analysis is based on survey data collected from 2,687 low- and low-middle income households in 18 urban areas with populations of less than 200,000 across Zambia and Kenya. We perform statistical analyses to investigate the association between UA and household food security and assess which types of households are engaged in UA.

We found that 33% of households in our sample are engaged in UA and there was limited statistical significance in terms of the relationship between UA and household food security. Our results reveal three key barriers to UA, namely settlement formality, property rights, and distance from food retailers. These barriers imply the need for urban planners and policymakers to revisit how decisions are made about issues such as residential development, land tenure, transport infrastructure, and the use of space in cities, as these affect the ability of households to produce, sell, and access food. Policy and planning mechanisms should further recognize the embeddedness of UA within African urban food systems, in which traditional markets, informal trading, and modern food retail also play an integral role.

Elsevier is a world-leading provider of information solutions that enhance the performance of science, health, and technology professionals.

All knowledge begins as uncommon—unrecognized, undervalued, and sometimes unaccepted. But with the right perspective, the uncommon can become the exceptional.