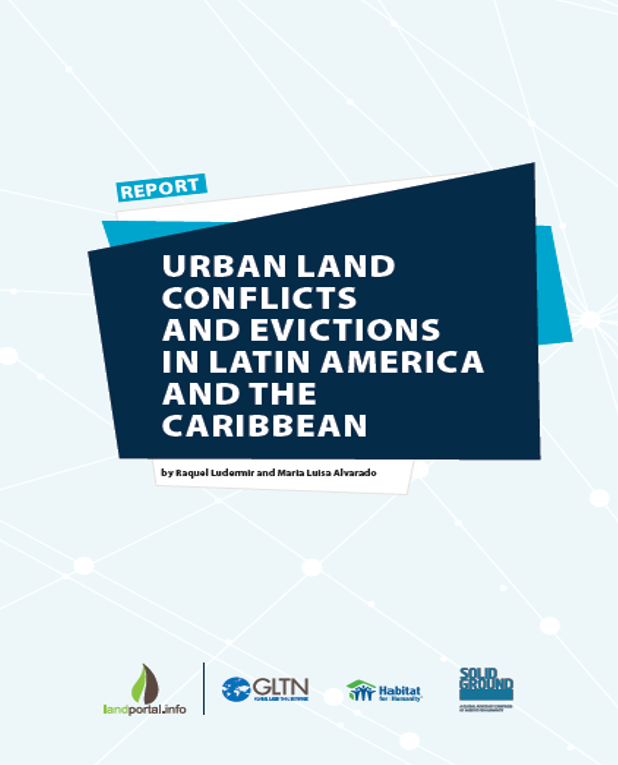 In the Latin American and Caribbean region (LAC), millions of families live under a constant threat of being evicted from the land and homes on which they live. The urbanization process across the region builds on an essentially unequal basis. As cities and urban populations grow, competing interest and demand for land also grows, be it for housing and food production, as well as for a variety for a variety of economic activities that depend on land. However, since land is a limited resource and increasingly unavailable within LAC cities, intensified pressures on urban land can lead to a shortage of land and skyrocketing land values. To the urban poor, this means that formal access to land becomes increasingly difficult. Lack of access to land can result in "informal" or unregulated land management and occupation. The most vulnerable tend to continue living in undocumented property either because they are not aware or because they don't have the resources/capacity to undergo costly and lengthy legalization/regularization processes. Alongside the phenomenon of informal settlements occupied mainly by those who use land for shelter and subsistence there is much room for land corruption led mainly by those who seek to capture the exchange value of land as a commodity. Meanwhile, as competition for land intensifies, nearly 70% of land systems across the globe remain undocumented.[1] Particularly in developing countries, enormous surfaces are covered under social tenures, informal and overlapping rights. Land regularization is not a feasible option to the majority of informal dwellers due to financial, technical and judicial barriers. As a result, rapid urbanization is often associated with a decrease of tenure security, particularly for the urban poor. This can negatively impact millions of people. In 2015, the United Nations Special Rapporteur on Adequate Housing as a Component of the Right to an Adequate Standard of Living acknowledged the increasing rates of forced evictions with impunity, the expansion of informal settlements (often without basic services like water, sewage, electricity or roads), the development of unaffordable rental properties, and the tenure insecurity of millions of people.[2] Land conflicts and forced evictions are increasingly reported as a key issue in the advocacy agenda of civil society organizations (CSOs), while the causes and many forms it occurs are ineffectively addressed by land policies. Meanwhile, right holders and defenders, as well as duty-bearers, often lack access to reliable data and information to identify, monitor, mediate and prevent land conflicts, which may easily lead to violations of human rights, such as the right to adequate housing. In January 2017, SueloUrbano.org and the Land Portal teamed up to facilitate a regional conversation on Urban Land Conflicts in Latin America and the Caribbean. The aims were to better understand the types and causes of land conflicts across the LAC region and to map and learn from the tools and experiences addressing the issue. In parallel, the idea was to connect people, organizations and existing knowledge key resources to strengthen further collaboration for action, building on evidence and lessons learned towards changes in land policies, systems and practices. Building on the 28 contributions received in English, Spanish and Portuguese, informing about the reality of 12 countries, this report summarizes the main themes and ideas brought up during the discussion, related to external references when possible. UNDERSTANDING THE ISSUE In the first section, the report provides evidence from the ground of five different types of urban land conflicts and evictions encountered across the region: Conflicts between occupants and private owners; Conflicts with government authorities often related to large scale interventions; Intrafamilial conflicts, such as in the case of inheritance or land succession; and when patrimonial violence against women takes place; Displacements related to civil/armed conflicts; Displacements related to disaster and climate change. Why are people fighting over land in urban and peri-urban areas? Isn't there enough land for everyone within cities? What are the impact of and the challenges for addressing urban land conflicts? These are among the question that this first section of the report tries to answer. TOOLS AND GOOD PRACTICES The second section highlights the experiences addressing the issue, ranging from traditional and collaborative mapping tools, to incremental land policies, as well as advocacy, coalition building and other innovative practices. GOING FORWARD The third and final section of the report explores potential entry points for advocacy and action towards changes in land policies, practices and systems, such as through partnerships at local, regional and global levels, improved access to information and information flow among land community stakeholders, as well as the recognition of a continuum of land rights as an alternative to challenge the traditional land titling, registering and legalization efforts. This reginal discussion and consultation, carried out through a combination of online and offline efforts, helped to mobilize knowledge that typically remains inaccessible at regional and global dialogues. It informed about a variety of urban land conflicts happening in the LAC region, as well as initiatives and organizations addressing the issue, promoting and defending the tenure security of the most vulnerable. This report is not exhaustive and should be seen as a living document. It should serve mainly to inspire future initiatives willing to build on lessons learned to replicate, expand, adapt or improve tools, methodologies and ideas emerging across the LAC region.