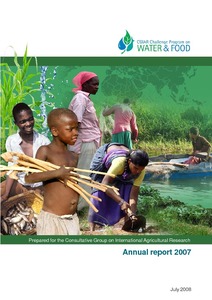 The CGIAR Challenge Program on Water and Food (CPWF) brings together scientists, development

specialists, and communities, in nine river basins across Africa, Asia and Latin America, to address

All of them are conducted by teams formed from partnerships of notable scope, breadth and

In 2007, the CPWF successfully concluded the selection of eight gap?filling projects in a second

Naturally the Challenge Program’s diverse partnerships continue as an integral feature of its work.

Due to interactions between partners of different backgrounds and approaches, CPWF

scientific research. With the addition of the new 2007 projects, a total of 213 institutions now

science, both by “conventional” publication measures and in its progress towards impact. Based

on CPWF work to date, approximately 180 peer?reviewed papers have been received in journals,

books and research reports, including CPWF contributions to publications of the Comprehensive

Assessment on Water Management in Agriculture.

For the 2007 CPWF Annual Report, the five Themes, which work across the nine basins, integrated

their findings under four topics of international public value:

4. Unique contribution of the CPWF

in Vietnam. Successful lessons from the project have been picked up in the Ganges Basin,

as well as other locations as a result of two delta scientific conferences, organized and

hosted by the project.

basis of two projects the review chair visited in India. For Project 34 on Fish Production in

Tropical Reservoirs, the comment was: “An intensive interaction with the local fishers

indicated that even though the project is comparatively new, their lives have already been

positively impacted upon, and they are excited by the results of the project, which may

• The concept of Multiple?Use Systems of Project 28 has proved important to the CPWF.

well as provided viable new production and water?use alternatives for farmers in parts of

developing new ways of facilitating and implementing negotiation between small?scale

resource users. Early methodological results from the project received an award from the

science to assess fundamental questions in the ecological, political, and social foundations

• CPWF Project 50 on Water Governance in the Mekong, has employed an innovative

year: the Basin Focal Projects report that some of the most exciting results have come from their

comparative work on water use and poverty across basins, and the Program’s Participatory Impact

In 2007 thirteen of the CPWF’s 14 Small Grants for Impact Projects concluded, many with very

encouraging results for small producers that illustrate the impact opportunities of water?for?food

technologies, including the system of rice intensification (SRI) in eastern Thailand and small?scale

funded and implemented, principally in West Africa in partnership with IFS and French?supported